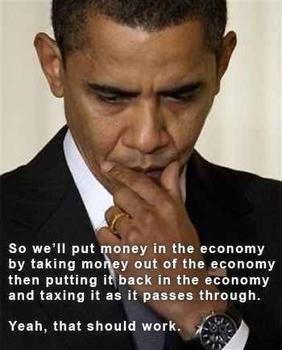 Obama’s 2013 budget is the gift that keeps on giving – to government.  One little “surprise” hidden in the massive assault on common sense is his proposal to triple the tax rate on corporate dividends.

Obama wants to assault America [even more] by raising the dividend tax rate to the higher personal income tax rate of 39.6% next year.  When you add that to the planned phase-out of deductions and exemptions, the actual tax rate is closer to 41%.   Then, of course, you have to add in the 3.8% investment tax surcharge in Obamacare, and the new dividend tax rate in 2013 would be 44.8%, almost three times its current rate.

Dividends are paid to shareholders only after the corporation pays taxes on its profits.  Assuming a maximum 35% corporate tax rate and a 44.8% dividend tax rate, the total tax on corporate earnings passed through as dividends would be 64.1%.

Of course, Obama assures us that this obscene tax rate would only be paid by the filthy rich who make $200,000 a year, or $250,0oo a year if you’re a greedy filthy rich couple.   But the truth is, shareholders of all income levels will share the pain.  Retirees and near retirees who depend on dividend income would be hit the hardest.  Almost 3 of 4 dividends paid out go to those over the age of 55 and more than half go to those older than 65, according to IRS data.

According to the Investment Company Institute, about 51% of adults [100 million] own stock directly or through mutual funds.  Tens of millions more own stock through pension funds.

What effect do you think this will have on the stock market or on your personal investments, or for that matter your  retirement income?

The British Treasury reported that the self-assessment returns from January, when most income tax is paid by the better-off [filthy rich], have fallen since taxes were increased.  “. . .it looks like there’s been quite a lot of forestalling and other manoeuvring to avoid the top rate.”   Britain raised the top tax rate to “prove that the rich were paying their fair share.”

Francesca Lagerberg, head of tax at Grant Thornton, an accounting firm, said that his “guess is that because the 50% rate was flagged in advance, many taxpayers, particularly those with their own businesses, decided to extract dividend ahead of the change.  It highlights the fact that high tax rates don’t always deliver high tax revenues.”

The Confederation of British Industry urged ministers not to introduce new levies on the rich, warning that the UK “will become a less attractive location for entrepreneurs and key employees.”

It didn’t work in Britain and it won’t work in America.  Raising taxes is just plain stupid.  We need jobs, not redistribution.  It is a proven fact – higher taxes, less jobs.