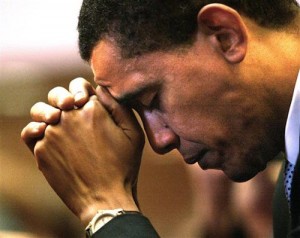 Dear god of my faith, please remove all intelligence, wisdom and common sense from these judges and force my unconstitutional obamacare upon the people so I can continue to tax them, close businesses, increase unemployment, which will allow me to increase my power and control over these peon citizens. I am doing my best to continue our plans of Socializing this nation and removing all freedoms, the Constitution and the Bill of Rights. And please remember, I have exempted all Muslims from the healthcare package. I have however, been sure to include all the infidel Christians. As always, wonderful me!

The White House has begun an aggressive campaign to use approaching Supreme Court arguments on the new health care law as a moment to build support for the measure seen as President Obama’s signature legislative achievement, hoping to shape public opinion on an issue at the center of the battle for the White House and Congress.

White House officials reportedly called on dozens of nonprofit leaders to aid them in organizing a prayer vigil outside the court – right when justices plan to hear arguments for three days beginning March 26.

NYTimes – At the White House meeting on Wednesday, a wide range of advocates representing consumers and people with diseases and disabilities — as well as doctors and nurses, labor unions and religious organizations — discussed plans to bolster the landmark law, which is being challenged by 26 states as unconstitutional.

Supporters of the law plan to hold events outside the court on each day of oral argument. The events include speeches by people with medical problems who have benefited or could benefit from the law. In addition, supporters will arrange for radio hosts to interview health care advocates at a “radio row,” at the United Methodist Building on Capitol Hill.

People who attended the meeting on Wednesday said the speakers included Jennifer Palmieri, deputy communications director at the White House; Jon Carson, director of the president’s Office of Public Engagement; Jeanne M. Lambrew, deputy assistant to the president for health policy; and Mark B. Childress, a deputy chief of staff at the White House.

According to the Times, more than 60 organizations sent representatives to the meeting.

For months, Democrats in Congress and progressive groups have urged the White House to make a more forceful defense of the health care law, which is denounced almost daily by Republican lawmakers and presidential candidates.

Progressive/Socialist Groups working with the White House include the Service Employees International Union; the American Federation of State, County and Municipal Employees;  Health Care for America Now, a consumer coalition that fought for passage of the legislation; Protect Your Care, a nonprofit group created last year to defend the 2010 law; and the Center for American Progress, a research and advocacy group with close ties to the White House.

Opponents of the law will be active as well and are planning to show their sentiments at a rally on the Capitol grounds on March 27, the second day of Supreme Court arguments. Republican lawmakers, including Senator Patrick J. Toomey of Pennsylvania and Representative Michele Bachmann of Minnesota, are expected to address the rally, being organized by Americans for Prosperity, with support from conservative and free-market groups like the Tea Party Express.

This is nothing but an attempt by Obama and the far left to embarrass Christians who are standing against the  unconstitutional HHS mandate.

Anyone wanting to stand up for Freedom with the Tea Party, grab your shovels and head to DC.

← Can the President Kill You?
Liberals Explain Why We Don’t Need Oil →