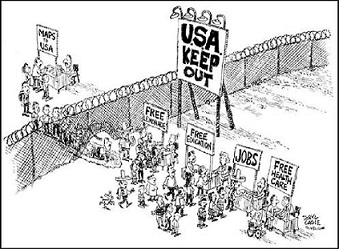 HR 3808, “The Scott Gardner Act”, introduced by Rep. Sue Myrick, R-NC, is named after an UNC student that was killed by a drunk driver, Jorge Humberto Hernandez-Soto, an illegal alien who had been deported to Mexico 17 times prior to Gardner’s death.

Myrick’s bill would amend the Immigration and Nationality Act with regard to detention of illegal aliens apprehended for drunk driving so that arresting officers could inquire about his/her legal status.  If the individual is an illegal alien he/she would be turned over to Immigration and Customs Enforcement (ICE).

In hearings of the Judiciary Subcommittee on Immigration Policy and Enforcement,  Myrick testified that since 2006, 11,494 illegal aliens had been arrested in her district and of those, 2,789 had been for drunk driving.

Rep Lofgren, D-CA, the ranking Democrat on the committee said that “by directing state officials to treat people differently based on their perceived alienage, the bill would essentially become a national version of the Arizona and Alabama immigration laws, inviting widespread racial profiling and discrimination.”

Rep. Gonzalez, D-TX said that drunk driving is already covered when state and local law enforcement agencies are taking part in DHS’s Secure Communities program which allows them to check an arrested person’s legal status on a federal database.  But, then again, that only works unless you happen to live in an area that doesn’t cooperate with federal authorities on immigration matters.

Dennis McCann just happened to live in such an area, Cook County, when he was killed by a drunk driver with 5 prior DUI arrests.  Saul Chavez was arrested and released on bail before he could be tried in McCann’s death and to this day no one knows where Chavez is.

Anthony Moore was only 10 years old when he was killed by a drunk driver Mario Alberto Saucedo who had at least 2 prior DUIs.  Matt Denice, age 23 was killed by Nicholas Guaman who had 4 prior arrests for driving without a license, assault and battery on a police office, etc.   The list is far too long to mention everyone who has needlessly died at the hands of illegal aliens.  In Prince William County, Virginia, alone, 321  illegal aliens were arrested for DUIs in 2010.

Do you not see a problem with this picture?  The federal government sues  states that dares to pass immigration laws to protect their own citizens from illegal aliens and drug traffickers, but does nothing to enforce federal immigration law.   And, even when Congressional members try to pass some common sense law to protect citizens from drunk illegal aliens, the Democrats go on the attack playing the racial profiling and discrimination card.   What about the rights of the people who gave up their lives?  The only people being discriminated against are American citizens who must abide by all laws or end up in jail.

Personally, I don’t think Myrick’s bill is unreasonable except for the fact she would turn illegal aliens over to ICE which will end up turning them loose per DHS policy.

Jessica Vaughn, director of Policy Studies at the Center for Immigration Studies said legislation was essential to “fill a very serious gap in immigration law enforcement” that allows dangerous illegals to stay in our country in defiance of U.S. laws.  “Over 100 criminal illegal aliens have been released back into Cook County community in the last few months.”

We need more than just legislation to deal with drunk illegal aliens.  We need someone in our government that will take the problem of illegal immigration seriously.  We have states along the southern border under siege and God only know how many terrorists have crossed the border into the U.S.

Democrats see illegal immigrants as nothing more than a new voter while the rest of the country has to pay the price.

4 comments for “Illegal Aliens Have More Rights Than Citizens”