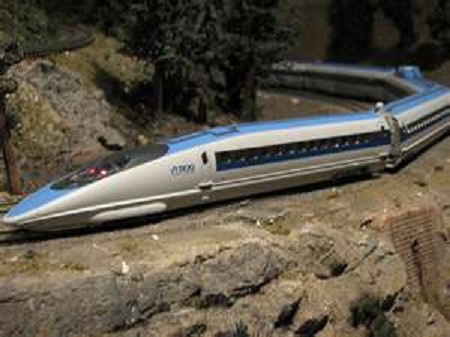 At the edge of the Mojave Desert, Victorville, a small city where storefronts are shuttered, a company linked to Senate Majority Leader Harry Reid wants to build a bullet train that would rocket tourists from the middle of nowhere to the gambling palaces of Las Vegas.

The idea behind the park-and-ride multi-billion project is people will drive 100 miles from Los Angeles, park their cars and board the 150 MPH train to gamble.

Privately held DesertXpress is on the verge of landing a $4.9 billion loan from the Obama administration’s push to modernize the U.S. rail network, plus Democrats are hoping to give Obama’s re-election a boost in Nevada.

Transportation Secretary Ray LaHood has blessed the train –  and planners imagine millions of travelers will flock to the isolated town station.

Athough an alliance of businesses are backing the project, and the project has cleared several regulatory hurdles in Washington, the Federal Railroad Administration from its own research warns it’s nearly impossible to predict how many people will actually ride the train.

Thomas Finkbiner of the Intermodal Transportation Institute at the University of Denver says “It’s insanity. People won’t drive to a train to go someplace. If you are going to drive, why not drive all the way and leave when you want?”

Construction cost projections have soared to as much as $6.5 billion, not including interest on the loan. Some fear taxpayer subsidies are inevitable.

Reid and other supporters point to research that shows 80,000 new jobs, but FRA documents show virtually all those would be temporary – no more than 722 would be permanent.