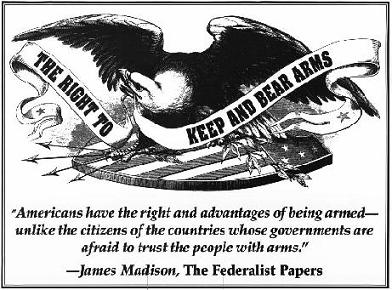 “Laws that forbid the carrying of arms. . .disarm only those who are neither inclined nor determined to commit crimes. . .Such laws make things worse tor the assaulted and better for the assailants; they serve rather to encourage than to prevent homicides, for an unarmed man may be attacked with greater confidence than an armed man.”   Thomas Jefferson

The 2nd Amendment has been under attack by liberals and anti-gun activists for years.  Now, more than ever,  it is imperative for gun owners and supporters of our Constitutional freedoms to become active – to fight back against those who would deprive us of our right to carry or those that continue to pass laws making it harder for law abiding citizens to own a firearm.

In 1995, when comparing gun control to the way government helped create a stigma for smoking, Holder bragged “Now we have people who cower outside of buildings and kind of smoke in private and don’t want to admit it. We need to do this every day of the week and just really brainwash people into thinking about guns in a vastly different way.”  The White House makes no bones of how much they want to terminate the 2nd Amendment, or the entire Constitution for that matter.

Two new bills have been introduced in the Senate that would make it easier for those with concealed handgun permits to travel.  But without your support and pressure on your Senators, neither has much a chance of passage.

Senator John Thune, R-SD and David Vitter, R-LA  introduced  S 2213, the “Respecting State Rights and Concealed Carry Reciprocity Act of 2012”.  Rather than allowing  the federal government to set national standards for concealed carry permits, S2213  would clear the path for gun owners with state based concealed carry permits to travel state to state with concealed handguns, ending the patchwork of state laws for travelers.  Thune’s bill would also cover  gun owners who live in states that don’t require a permit to carry a gun.

While Senator Thune’s bill is a common sense approach to the problem, The National Rifle Association prefers S 2188, the “National Right-to-Carry Reciprocity Act” introduced by Senators Mark Begich, D-Alaska  and Joe Manchin, D-WVA.   S 2188 is a companion bill to  HR 822 that pasted the House last November  272-154.  It  would amend Title 18 US Code  to allow any person with a valid state issued concealed carry permit to carry that concealed weapon into another state that issues concealed carry permits or  does not prohibit the carrying of a concealed firearm, for lawful purposes.  State laws would still apply regulating where a concealed weapon may or may not be carried.

S 2188 would not create a federal gun registry or federal gun owner licenses, nor would any federal agency to able to establish standards for a concealed carry permit or impose gun control restrictions.  The bill actually strikes a balance between state  sovereignty  and the spirit of the 2nd Amendment.

Several other anti-gunners like Boston Mayor Thomas Menino, Newark Mayor Cory Booker, Denver Mayor Michael Hancock, and Mayors of Boulder, Golden, Manitou Springs and Salida are against the bill for varying reasons.  Mayor Hancock of Denver thinks states should be able to do more to keep guns out of the hands of criminals.  Of course, everyone knows that when guns are outlawed, criminals will just turn in their illegal weapons because they are such model citizens.   Honestly, by now, you would think that anti-gunners could come up with another excuse.

Senator Gerald W. Morgan, R-Kansas has introduced legislation to protect gun owners from the United Nations.  His bill,  S 2205, the “Second Amendment Sovereignty Act”,   would  protect the rights of American gun owners from being undermined by a United Nations Arms Trade Treaty, which Hillary and Obama are pushing.    S 2205 would prohibit the Obama Administration from using the “voice, vote and influence” of the U.S. during Arms Trade Treaty negotiations to restrict the 2nd Amendment rights of U.S. citizens or from regulating civilian firearms and ammunition.

It was in October of  2009, that Obama, through Hillary Clinton,  reversed Bush’s position on the treaty and voted for the U.S. to participate in establishing “common international standards for the import, export, and transfer of conventional arms,” including tanks, helicopters, and missiles.  Of course you know the UN and Obama aren’t  going to stop there.   Member nations are  calling for the treaty to include civilian arms and ammunition, along with UN gun registration for existing arms which would make it easy to confiscation firearms on a world wide scale.  It is much easier for the “elite” to take over when their citizens are disarmed.

Senator Morgan’s bill would ensure that our country’s sovereignty and our 2nd Amendment will not be governed by countries with little respect for gun rights.   He has also been working within the Senate to amass support for non-ratification of the treaty.  In July of last year, he along with 44 other Senators sent Obama and Hillary a letter of their intent to oppose ratification of any Small Arms Treaty that would restrict or infringe upon our 2nd Amendment rights.  He has enough opposite to block the treaty from Senate passage.

The UN hopes to have the treaty completed in July of this year so it  is never too early to start contacting your Senators and exert a “little” pressure for them to oppose the treaty.

← Adding Insult to Injury Jane Fonda will Play Nancy Reagan
Well – It Looks Like Now They Control EVERYTHING! →