Obama has suddenly discovered  a way to get more Democrats into the country, while posturing for votes from the Latino community and making Congress and voters even more redundant. 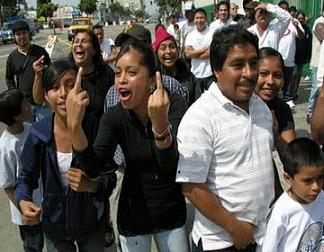 His latest proposal would  make it easier for illegal immigrants, who just happen to be immediate family members of American citizens, to apply for permanent residency without having to leave the country.    This move could affect as many as 1 million  potential new Democratic voters.  When I say proposal – I mean, he is throwing it out there to see which way the wind blows before he writes another Executive Order.

The Dream Act was defeated last year and no serious legislation has been under consideration since the Democrats and RINOs don’t want to hurt their chance of re-election.  Obama, on the other hand, has little to lose.

Obama’s  future Executive Order, which amounts to nothing more than a hardship waiver, will allow illegals to claim that time spent apart from their spouse or children who happen to be citizens would create – guess what! – an “extreme hardship” and thus they could just stay here illegally while applying for legal status.   If they get approval, they would have to briefly go home to their native country to pick up their visa and like magic, they are on their way to becoming new Democratic voters.   What a scam!

I have to agree with Lamar Smith, R-TX, who said that “Obama and his administration are bending long established rules to grant backdoor amnesty to potentially millions of illegal immigrants.”

Javier Ortiz, a Republican strategist said that it “looks like the president is pandering to Hispanic voters.”  You think!  “I would argue that Hispanics are smarter than that, and they know he [Obama] has failed to bring forward comprehensive immigration reform.”

Want to stop this latest attempt to circumvent the laws of our country – start writing and calling your Representatives.  The “proposal” was posted in the Federal Register on Monday [April 2] which means we have 60 days to let them know what we think.   While it probably won’t affect Obama’s position, it will give others who must face the voters in November something to ponder.