Signed in SECRET by Obama, HR 347 discriminates Against your First Amendment Rights.

This was a collaborative efford by both sides of the isle to suspend our 1st Amendment Rights! 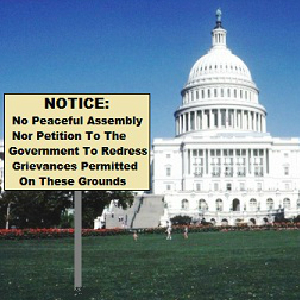 The law also allows Obama to give Secret Service protection to whomever he wants. In other words, Obama can now assign SSA’s to all of his friends; Al Sharpton, Jessie Jackson, Van Jones, Louis Farrakhan, Axlerod, etc…and we the tax-payers are not allow to voice our opinion or carry a protest sign.

I’m guessing the OWS protesters, the New Black Panthers, Communist Groups, Muslim Groups, etc., who happen to agree and are working directly or indirectly with the Obama administration will be allowed to continue their protest unscathed.

I also find it interesting that so many of the FBI, military, etc., have been, and are being terminated from duty suspected of participating in a prositution scandal. Good timing wouldn’t you say?

Could it be that these agents were set-up, humiliated and fired for not agreeing with the Obama administration just to clear the way for Obama to replace them with those who will carry out Obama’s wishes?

The fishy odor I usually get has now changed to 100% skunk, and THIS stinks to high heaven.

There seems to be an urgency in the Obama administration to take over and become Dictator before the next election. He is trying to silence those of us who see and know the truth, hoping we will come out in arms to recapture what he has destroyed while using his cohorts to incite riots.

Obama wants and needs a civil war in our country; a war between races so he can either declare Martial Law and or cancel the elections due to uprisings.

Obama has sold us out to the Muslim Brotherhood, China and Russia. We are truly dealing with evil at the highest level of government.

Who can we trust now?