Hamas and the Washington establishment 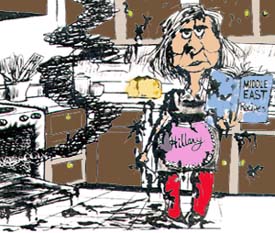 Newt Gingrich was the 1st major political figure in more than a century to debunk the Palestinian ‘myth’ of indigenous peoplehood. “Palestinians are an invented people”.

Newt continued explaining, “ Their invention came in response to Zionism, the Jewish national liberation movement. Since their creation around 1920, their main purpose has not been to establish a Palestinian state. Their purpose is to obliterate the Jewish state”.

Newt has not backed down on this candid truth even though politicians on both sides have attacked him.

Gov. Rick Perry spoke another truthful revelation before his withdrawal as a candidate in South Carolina. “Turkey is being ruled by what many would perceive to be Islamic terrorist. And the United States should be having a debate about whether Turkey should continue to serve as a member on NATO”.

The ruckus generated by Perry’s statement shows just how mislead America has become, and the extent to which the Unites States has adopted Middle East policies that are detrimental to our nations interest.

In Janurary 2006, after Hamas won the Palestinian elections, Turkey was the first country to invite Hamas’s terror master Khaled Mashal to Ankara. This move by Turkish Prime Minister Recip Tayyip Erdogan’s provoked criticism from the Bush administration. But Erdogan just shrugged it off.

By 2006, then secretary of state Condoleezza Rice had come to view Erdogan as the US’s indispensable ally in the Muslim world, thinking he was proof that Islamist parties could be democratic and moderate, even though Erdogan embarked on a systematic campaign to stifle press freedom, curb judicial independence and imprison his political critics in the media and the military did not way on Rice’s view that Erdogan personified her belief that moderate jihadists exist and ought to be embraced by the US.

This set the stage for Obama’s even stronger embrace of the increasingly tyrannical Turkish Islamist. Since Obama’s election, not only has Ankara stepped up its support of Hamas, but has ended the pretense of a continued strategic alliance with Israel that was maintained during the Bush years. Turkey then began serving as Iran’s chief diplomatic protector while vastly expanding its own strategic and economic ties with Tehran.

With Turkey’s openly anti-American activities, Obama now clings to Erdogan, like a child clings to his blankie with Obama reportedly viewing Erdogan as his most trusted foreign adviser. According to media, Obama speaks with Erdogan more often than he speaks to any other foreign leader.

In a recent interview with Time magazine, Obama listed Erdogan as one of the key foreign leaders with whom he has formed a friendship based on trust, even though over the past few weeks, Turkey has emerged as Hamas’s largest financier.

Hamas’s terror master in Gaza Ismail Haniyeh received a hero’s welcome during an official visit to Turkey. Erdogan pledged to finance the jihadist movement to the tune of $300 million per year.

COMMENTATORS CLAIM that Turkey’s sponsorship of Hamas was necessitated by Iran’s abandonment of the terror group. Iran, it is claimed, cut Hamas off in August due to the Palestinian branch of the Muslim Brotherhood’s refusal to actively assist Iran’s other Arab client — Syrian President Bashar Assad — in massacring his domestic opponents.

These analyses are problematic for two reasons. First, it is far from clear that Iran cut Hamas off. Iran’s rulers have invited Haniyeh to Tehran for an official visit. This alone indicates that the mullahs remain committed to maintaining their relationship with the jihadist movement that controls the Gaza Strip.