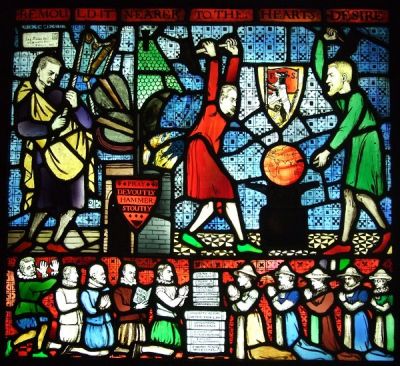 No single definition encompasses the many organized vocal socialist variants that took root in Europe and America during the late 1800′s.  At least they made it easy to spot the enemy.  But, there was one socialist movement in the United Kingdom and America who methodically spread their doctrine throughout America, gaining dominance over the others – the Fabian Socialist.

The Fellowship of the New Life founded in England in 1883 by Scottish intellectual Thomas Davidson consisted of poets, novelists, animal rights activists and feminist.  Their object was “the cultivation of a perfect character in each and all.” It was sort of the hippie movement of their time.

A few of their more radical members wanted to become more politically active so, in 1884, Sidney and Beatrice Webb, George Bernard Shaw, Edward Peace and other like-minded members split off to form the Fabian Society.   The Fabian creed written in 1887 states “It therefore aims at the reorganization of society by the emancipation of land and industrial capital from individual and class ownership.  The society accordingly works for the extinction of private property in land. . .”.

Shaw named the society after the Roman General Fabius Cuncator, “The Delayer”, who preferred a slow progressive tactic in battle rather than a direct frontal attack, gradually wearing down his opponents.  This tactic was adopted by the Fabian Society to further their aim of world dominance.  From the very beginning it was  decided that if they were to make change happen they had to infiltrate  business, government, and international organizations throughout Europe and  America.  English Professor G.D.H. Cole, who would later become President of the Society, stressed that all forms of socialism should be sustained and used toward the objectives planned throughout the world “both the social-democratic parties, Labour party members and others in Europe and in the New World, and communism in Russia, or  other minority groups elsewhere, since there is no difference in their objectives, only in their methods.”

George Bernard Shaw unmasked the simple mindset of the Fabian movement in “The Intelligent Woman’s Guide to Socialism and Capitalism” – “under socialism, you would not be allowed to be poor.  You would be forcibly fed, clothed, lodged, taught, and employed whether you liked it or not.  If it were discovered that you had not character and industry enough to worth all this, you might possibly be executed in a kindly manner, but whilst you were permitted to live, you would have to live well.”

Permeation of the United States was primarily through universities, the main root being Harvard.  British Fabian leaders Sidney Webb and Edward R. Peace came to the U.S. in 1888 to train American groups in the art of socialism.  With their influence and guidance, the Intercollegiate Socialist Society (ISS) was founded in New York City in 1905.  During the same period, the Rand School of Social Science was formed and became the New York headquarters of the ISS.  By 1908 a chapter of the ISS had formed at Harvard.  Other chapters quickly followed in Princeton, Columbia, Barnard, New York University and the University of Pennsylvania.  by 1916, the ISS had lectured on socialism to over 30,000 students throughout the country.  Hundreds of men and women, who would later become big names in government, press, radio, television, and the motion picture industry, were among their early recruits.

It was while at Harvard that Roger Baldwin, an ISS member, outlined a Fabian device of capturing power through stealth and deception.  In an advisory letter to a socialist agitator he wrote  “do steer away from making it look like a socialist enterprise. . .we want also to look patriot in everything we do.  We want to get a good lot of flags, talk a good deal about the Constitution and what our forefathers wanted to make of this country, and to show that we are really the folks that really stand for the spirit of our institutions.”

The dominate plan for American was to target our legal system by changing the meaning of our stated legal concepts and to codify those  changes with cases brought by Fabian lawyers before Fabian Judges.  One of their converts, Felix Cohen, a Yale professor wrote “It is possible to attempt the overthrow of capitalism as an economic system without at the same time attacking the substance of capitalist law. . .Socialists can learn from their adversaries that it is always possible to attack existing law, in the name of democracy, justice, and liberty,  in the name of the great ideals of the American Constitution, and in the name of law itself.”

English intellectual Harold Laski, a Fabian disciple of the Webbs, founded the ACLU along with his American Fabian associates Felix Frankfurter, Norman Thomas and John Dewey.  Other Fabians of note were the Reverend Harry Ward, founder of the communist front Federal Council of Churches; William Z. Foster, chairman of the American Communist Party and author of “Toward Soviet America”; communist Elizabeth Gurley Flynn; socialist Eugene V. Debs; and Clarence Darrow, ACLU attorney at the Scopes trial.

Walter Lippman and Felix Frankfurter, both  ISS members, managed to attach themselves as special assistants to the Secretary of War in 1917.  While there, they became friends with the  Assistant Secretary of the Navy, Franklin D. Roosevelt.  FDR would later reward this friendship by appointing Felix Frankfurter to the Supreme Court.  The Fabian movement capitalized on this connection by securing hundreds of  jobs in key government positions.   Lippmann and Frankfurter also used their influence to aid left-wing conscientious objectors during WWI who refused to support “any war under the  capitalist system”.

Harry Laidler, an ISS member wrote in 1919, “The Fabian socialism considers that the transition from capitalism towards socialism should be effected gradually.  It foresees the socialization of industry by means of well controlled political and economic agencies; the middle classes are the best means of introducing and developing the technique of an administration intended for a new social order.  . .”

In the name of liberty, Fabians seek to destroy individual rights.  They smugly wrap themselves in the flag while plotting to transfer power to bureaucracies staffed with friends and paid by those whose freedom they seek to usurp.  They seek to entangle us in a jungle of laws phrased in incomprehensible language, upon which we will not be able to extricate ourselves.  Their central crusade is the eradication of God in public life.

← WHEN DID PARENTS SURRENDER THEIR RIGHTS?
A Massive Constitution Lobby →