The real war against women has nothing to do with the morning after pill or insurance coverage.  This war transcends the debate between pro-life and pro-choice and it is not even waged on U.S. soil, at least not yet. 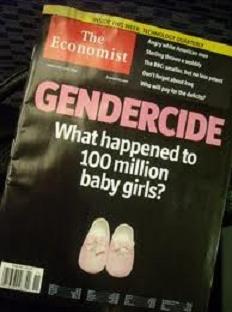 As the U.S. debates Obamacare and the contraception mandate, Chinese women are being dragged out of their homes, strapped down to tables and forced to abort babies that they want, up to the ninth month or pregnancy.  Sometimes the women themselves die, along with the full term babies.

Equally appalling, baby girls are being selected for termination.  According to one UN estimate, up to 200 million women are missing in the world today due to gendercide, the sex-selective abortion of baby girls, mostly in China and India.

China’s One Child Policy causes more violence against women and girls than any other official policy on earth.  It is systematic, institutionalized violence against women.  Forced abortion is violent – it is official government rape.  Forced sterilization is often done without anesthesia and may cause infection, which can ruin a woman’s reproductive and general health.   China has the highest female suicide rate of any nation in the world  —  an estimated 500 women a day end their lives.

Because of gendercide, there are now approximately 37 million more males living in China than women.  This gender imbalance is driving sexual slavery not only within China, but from the surrounding countries as well.

But don’t think this ends with China, not if  the United Nations and population control advocates in the U.S. have their way.

Already in Canadian newspapers, ads are running to inform would-be parents they can save themselves the hassle of creating the family they want by choosing beforehand which gender child they would like to have.   Since there is, for all intents and purposes, no law on abortion in Canada, the rule of thumb is that “anything goes.”  And that includes a hoard of throw-away children and pre-implantation genetic diagnoses or “selecting an embryo of known gender facilitating family balancing.”  In other words, if you want a girl — you can get a girl and if you want a boy and somehow get a girl you can fall back on gender selective abortion to fix that problem.

After the legalization of abortion “to save a mother’s life” evolved into “abortion on demand”,  far too many people have grown calloused enough to support aborting handicapped children and then aborting children based on gender preference of the parents.

While discrimination based on a person’s race or sex has long been illegal in America, federal law and 92% of states’ laws allow abortions to be committed even if it’s just because of an unborn baby’s race or sex.

Planned Parenthood states that its abortion clinics around the country have received at least two dozen inquiries about sex-selection abortions and  admits that they would not deny an abortion to anyone even if they knew the purpose is based on the child’s race or sex.  Of course, they claim they believe the inquires are part of a  sting operation by Live Action.  Whether or not that is true doesn’t change the fact that they admitted they would perform the abortion irregardless of the reason.

Last year Congressman Trent Franks of Arizona introduced the “Prenatal Nondiscrimination Act (PRENDA), HR 3541, to ban the practice of aborting babies based on sex or race.  The bill would make it illegal to

Not surprisingly,  at least 30 of the nation’s leading pro-abortion organizations, including Planned Parenthood and the ACLU are opposing the bill alleging that it would exacerbate already existing disparities by limiting some women’s access to reproductive health care and would further isolate and stigmatize some women.

What a crock – nothing could be further from the truth.  The fundamental human right at stake is the right to the life of the child which is further exacerbated by the fact that the very reason these babies are being abortion is because of their race or sex.