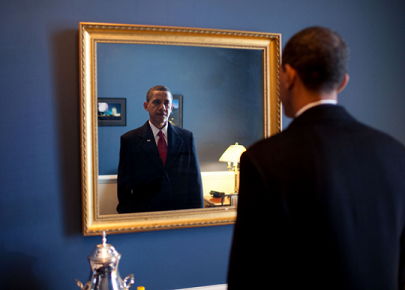 The presidential race recently took a turn for the humorous when the Obama campaign reveled its latest ridiculous microsite:  “The Life of Julia.”  Visitors were treated to a web-based slide show that follows an imaginary woman — Julia  — as she benefits from Obama’s unsustainable government largesse throughout her nonexistent life.  This revealing and creepy fictional illustration of dependency soon became the butt of well deserved ridicule, especially since its debut coincided with a reminder that Obama’s girlfriend in his first memoir was a “composite.”

As funny as the Julia parodies and imaginary girlfriend jokes may be they skirted a larger issue:  President Obama is a composite, too, and his carefully crafted political identity is coming apart.

The incumbent has been given more leeway and control over his life story than any other president in memory.  Most of the details of his early life come directly from his own pen.  The media did not scrutinize him.  His pre-political years and associations were given nowhere near the attention that media outlets have paid to those of Sarah Palin or Mitt Romney.  Only now, with the impending arrival of David Maraniss’ biography, will Obama’s early life be the subject of fair-minded but scrupulous inquiry.

Not until three and a half years into his presidency will readers discover that, according to his college friends and acquaintances, Obama made a decision in early adulthood to identify as “American” and not Kenyan and “Black” and not white or biracial.  Talk about presidential firsts:  One friend told Maraniss that Obama was “the most deliberate person I ever met in terms of constructing his own identity.”  The objective, said the friend, was political power.   Obama’s autobiography would be viewed as part of this composite-building project.

Obama was similarly meticulous in constructing his positions, attitudes, and demeanor when he became a professional politician.  Here, too, his identity was hard to pin down.  His alliance with Jeremiah Wright was necessary to gain credibility with Chicago’s African-American community.  He frequently voted present in the Illinois state senate in order not to offend particular constituencies.  He agonized over his decision to oppose the Iraq war because  he was afraid he would be on the wrong side of the issue.  His debut at the 2004 Democratic National Convention was a gauzy, abstract paean to national unity.  He became, as he put it in “The Audacity of Hope,” a blank screen on which people of vastly different political stripes project their own views.”  He ran for president as a bipartisan ‘pragmatist’ who would bring us together.

Obama’s exercise in self-fashioning was an extraordinary success.  He reached the pinnacle of American life. . .But composites are rickety, artificial things.  They are easily battered and bruised and exposed.  As the months turned into years Obama’s painstakingly developed persona was deconstructed piece by piece.  The layers of artifice melted away like a polar ice cap.  What was left was the real Obama.

Obama said he would root out money’s baleful influence on our democracy.  Yet the first big decision  he made as his party’s presumptive nominee was to forgo public financing.  That single action undermined the cause of campaign finance reform more than any Supreme Court decision.  He has regularly denounced corporate money as a candidate and as a president.  Yet Obama has raised more money from Wall Street than anyone in 20 years.  He was the largest recipient of BP contributions.  He incorrectly lectured the Supreme Court on its “Citizens United” decision, only to turn around in February 2012 and authorize subordinates to fund raise for his anonymous Super PAC.  His money-grubbing race for campaign cash has reduced him to raffling Mother’s Day Tweets and dates with George Clooney.

The bipartisan president left the business of governing to the old liberals who ran Congress at the beginning of his administration.  He was more than happy to watch them stuff the stimulus and cap-and-trade and health care bills full of goodies for Democratic Party clients.  The old bulls rammed legislation through the House on part-line votes and used procedural legerdemain and payoffs to squeeze the stimulus and Obamacare through the Senate, while Obama reminded Republicans that he wad won the election and spent untold hours in rhetorical combat with straw men.  Things took a turn for the worse after 2010, when the Republicans had their best showing since 1946, and Obama had to deal with Republican speaker of the House John Boehner and a non-filibuster-proof Democratic majority in the Senate.

Rather than work with Republicans, the president insisted that tax hikes be included on any deal to raise the debt ceiling and caricatured the House budget proposals as “thinly veiled Social Darwinism.”  Tea Party activists are portrayed in Obama for America ads as regressive kooks who believe “our best days were behind us.”  Private citizens such as Charles and David Koch and Republican Party strategists such as Karl Rove are described by the presidenjt’s top adviser “as contract killers.”

The composite identity that took Obama 47 years to create has come undone in less than four years.  It was just as faked as Julia.  Behold the man as he is:  A “New Politics” liberal whose idealism is dropped at the first sight of an FEC deadline.  There’s nothing funny about it.

You can read Cortinetti’s article in full at this link.

← If You’re A Parent You Should Read “Screwed”
Tyranny: Our Children’s Inheritance →