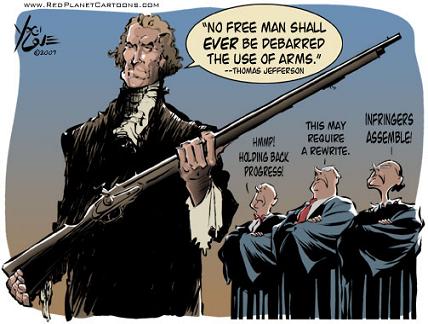 Our founding fathers recognized the natural right of self protection so they made certain that the Bill of Rights guaranteed the “right of the people to keep and bear arms.”  Today we are still under assault against this natural right from liberals, our President,  and the United Nations.

S 2205, the Second Amendment Sovereignty Act, introduced March 19, 2012, by Sentor Jerry Moran, R-KS, would bar the Administration from signing onto the U.N. Small Arms Trade Treaty.  Moran, along with most gun supporters, are concerned that the Small Arms Treaty would allow international bodies to regulate, restrict, or confiscate civilian firearms in the U.S.  This bill has not even been assigned to committee.

H.Res. 490, although not technically a gun bill, is an expression of no confidence in Attorney General Eric Holder, for his involvement in “Operation Fast & Furious” which allowed thousands of weapons to be illegal sold or transferred to violent drug cartels and known criminals, in an attempt to impose gun control through government action, rather than through legislation.   It was introduced last December by Rep. Paul Gosar, R-AZ, with 111 cosponsors  and is still in committee.

HR 2900 the Secure Access to Firearms Enhancement (SAFE) Act, introduced by Rep. Paul Braun, R-GA September of 2011, is written to provide reciprocity in regard to the manner in which nonresidents of a state may carry certain concealed firearms.  This too is still in committee.

S 2213, the Respecting States’ Rights and Concealed Carry Reciprocity Act, introduced in March of this year by Senator John Thune, R-SD, has never been referred to committee.

HR 822, the National Right to Carry Reciprocity Act of 2011,  introduced by Rep. Clifford Stearns, R-FL last February, actually passed the House November 16, 2011, but the Senate apparently doesn’t have the time to deal with it.

HR 1865, Recreational Lands Self Defense Act, introduced by Rep. Bob gibbs, R-OH, in March 2011, would protect the right of individuals to bear arms at water resource development projects administered by the Secretary of the Army.  It is still in committee.

HR 2252, Citizen’s Self Defense Act of 2011, introduced by Roscoe Bartlett, R-MD, to protect the right to obtain a firearm for security and to use in defense of self, family, and home and to provide for enforcement of such right.   As of June, 2011, the bill was still in committee.

HR 3440, Recreational Shooting Protection Act, introduced by Jeff Flake, R-AZ, to provide oversight and approval of any decision to close National Monument land under the jurisdiction of the Bureau of Land Management to recreational shooting.  The bill has been in committee since November, 2011.

HR 3594, the Second Amendment Protection Act, introduced by Joe Walsh, R-IL, to express the sense of Congress that the U.S. should not adopt any treaty that poses a threat to national sovereignty or abridge any right guaranteed by the Constitution such as the right to bear arms.  This bill has been in committee since December 2011.

Time is running out.  The United Nations expects to have the Small Arms Treaty ready in July and the Obama campaign is employing every dirty trick that can to guarantee a second term.  Apparently our so-called “gun supporters” in Congress would rather sit on their hands and wait for Obama to make his move.

An Obama second term means an end run around the legislative process  through schemes like those dreamed up by New York Mayor Michael Bloomberg’s “Blueprint for Federal Action,” a 40 point gun control package designed to be enacted by Obama, without Congressional approval.