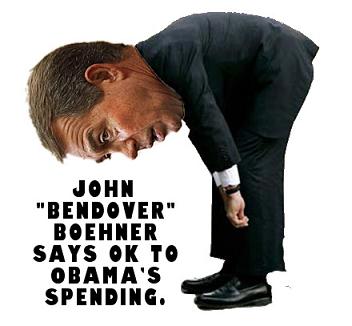 CNS News recently reported that the U.S. national debt has increased by around $1.6 trillion over the past 15 months.  “This Congress has added more to the national debt than the first 97 Congresses combined.”

While we expect liberal Democrats to spend like there is no tomorrow Conservatives should expect more from Republicans.  So far all the old-guard Republicans (Rinos) have done is remind us how bad the debt is and endlessly promise to stand up to Obama.  They fiddle – Rome burns.    If they had honestly wanted to stop the outrageous spending spree they could have  —  not a single penny of government money can be spent unless the House approves it and Republicans have control of the House.

The national debt is not a trivial issue, it is the greatest debt in the history of the world and it threatens to destroy the future of all Americans.  Today, we have more government debt per capita than Greece, Portugal, Italy, Ireland or Spain.

When it comes to fiscal issues the old Republican establishment (Rinos) are just a bunch of watered down liberal Democrats.

We are not being told the truth about our national debt.  If the federal government used GAAP accounting principles – the same standards they force businesses to use  – the true federal budget deficit for 2011 would have been $5 trillion, instead of the mythical $1.3 trillion the government reported.

According to a recent USA Today article, under GAAP accounting practices, the “government ran red ink last year equal to $42,054 per household which is nearly 4 times the official number reported under unique rules (lies) set by Congress.”   The median household income is only $49,445 according to the Census bureau.   These unique Congressional rules allow Congress to exempt inclusion of promised retirement benefits.  Yet, companies, states and local governments must include retirement commitments in financial statements, as required by federal law and private boards that set accounting regulations.

By exempting itself from real world accounting standards, the government is able to hide the truth about entitlement programs such as Social Security.   Under GAAP accounting practices, the government would have to tell you that they need $22.2 trillion set aside (and not in some mythical “trust fund”) and earning interest to cover benefits promised to current workers and retirees beyond the taxes Social Security actually collects.

In a recent Washington Times article, our Rino selected presidential candidate, Mitt Romney, reminded us that he has no plans to balance the federal budget during his first year in office because taking a “trillion dollars out of a $15 trillion economy would cause our economy to shrink [and] would put a lot of people out of work.”  In nonpolitical speak, ‘if I cut spending it will guarantee that I will become a one term president’.

Conservative Republicans could prevent his house of cards from collapsing but not as long as Rinos rule the party.

Hear that great swishing sound?   It is the sound of American being sucked into the abyss.

← I Thought Asking For Your ID was Racist!
The Obama Magic is Flagging →