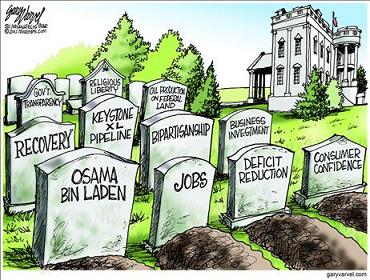 Last Friday night, the nation’s capital was under a tornado attack.  And, that was the best thing that happened to the White House all week.

On Thursday, Bill Clinton once more telegraphed that he considers Obama a light weight who should not have bested his wife.  Bluntly contradicting the Obama campaign theme that Romney is a heartless corporate raider, Clinton told CNN that the Republican’s record at Bain was “sterling.”

Covering a humorous W. (George W. Bush) at the unveiling of his portrait, the White House press actually seemed nostalgic for the president who bollixed up Afghanistan, Iraq, Katrina and the economy  –  a sure sign that the Obama magic is flagging.

On Friday, an ugly job market report led to the stock market’s worst day of the year.   As the ‘recovery’ flat-lined, the president ceded to a crowd at a Honeywell factory in Golden Valley, Minn., that “our economy is still facing some serious headwinds.” and getting sucked further into Europe’sinkhole.  In depressing imagery for the start of the summer campaign, cable channels carried the red DOW arrow pointing down while Obama spoke.

The president who started off with such dazzle now seems incapable of stimulating either the economy or the voters.  His campaign is offering Obama 2012 car magnets for a donation of $10; cat collars reading “I Meow for Michelle” for $12; an Obama grill spatula for $40; and discounted hoodies and t-shirts.  How the mighty have fallen.

In some ways  he’s still finding himself, too absorbed to see what’s not working.  But the White House is a very hard place to go on a vision quest, especially with a storm brewing.

You can read “Dreaming of a Super Hero,” by Maureen Dowd in full at this link.

← Ravished By RINOs
Economic Predictions for 2013 and Beyond →