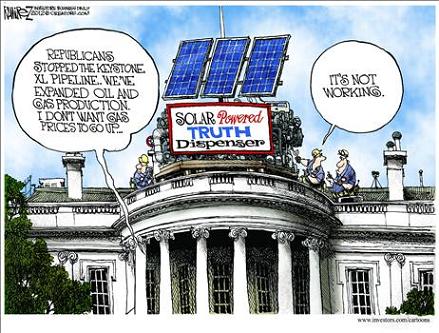 Lisa Jackson, EPA Administrator says that we face a grace threat to human health, welfare and justice.  For a change, she’s right.  However, the dangers are not due to factory or power plant emissions, or some supposed effects of “dangerous man-made global warming.”  The dangers come from policies and regulations that she and the Obama administration  is imposing in the name of preventing some  mythical climate change and other exaggerated environmental problems.

The gravest threat to America’s health, welfare and pursuit of happiness and justice is the EPA and the Obama administration.

Energy is the lifeblood of our nation’s economy, jobs, living standards and civil rights progress.  Anything that affects energy availability, reliability and price affects every aspect of our lives.

By hyper-regulating carbon dioxide, soot, mercury, “cross-state air pollution” from sources hundreds of miles away, and other air and water emissions, the EPA intends to force coal fired power plants, including up to 6 in Virginia, to shut down years before their productive life is over; sharply reduce emissions from cars, factories, refineries and other facilities, regardless of the costs.  The EPA regulations will also prevent the construction of new coal fired plants because it will be impossible to slash carbon dioxide emissions to half of what the average coal fired plant now emits without employing expensive and nonexistent CO2 capture and storage technologies.  Nationwide, the closure of some 319 coal fueled plants that generate power for some 40 million homes and businesses are slated to close.

Utilities will have to spend $130 billion to retrofit or replace older coal fired units and another $30 billion a year for operation,  maintenance and the extra fuel they will have to use for energy-intensive scrubbers.  All these costs will be passed to the consumer.

Duke Energy announced that their  new $3.3 billion coal gasification and carbon dioxide capture power plant will increase rates for Indiana customers by some 14.5% over the next two years.  Hospitals, factories, shopping malls and school districts will have to pay an extra $150,000 a year in operating expenses for each million dollars in annual electricity bills.   Not only could this mean no new jobs but the loss of existing jobs.

Illinois families, businesses could end up seeing their  electric bills rise  from beween 40% to 60% beginning in 2014.  The Chicago Tribune reports that the Chicago public schools may have to find an extra $2.7 million a year to pay for electricity.  Where do you think they will “find” that extra $2.7 million?

Appalachian Power is set to close 3 coal fired plants  with a loss of 240 jobs and a cost of  $17 million in lost wages and $13 million in state and local taxes.

Higher electricity prices will further strain refineries already struggling with soaring electricity costs and EPA’s sulfur and other regulations, restrictions on refinery upgrades and construction, constraints on moving crude oil to East Coast refineries,  and other compliance costs, all for dubious environmental or health benefits.  Three East Coast refineries have already closed, costing thousands of jobs and causing the Department of Energy to warm that pump prices are likely to soar even higher in Eastern states.

Lisa Jackson has also issued 588 pages of new rules for hydraulic fracturing for critically needed oil and natural gas.  Obama has vetoed the Keystone XL pipeline and made 95% of all publicly owned, but government controlled, energy resources unavailable for leasing, exploration, drilling or mining.

The environmental justice benefits that EPA claims as an excuse for all the oppressive rules and regulations, exist only in some dishonest computer-generated virtual reality that concocts its alleged climate change, health and environmental cataclysms, and in junk-science analyses that can best be described as borderline fraud.

Implementing the EPA’s (and Obama’s) regulatory agenda will inflict severe economic dislocations and send shock waves through America’s factories, farmlands and families.  Far from improving our  health and welfare, they will make our economy, unemployment, living standards, health and welfare even worse.

The new automobile mileage standards alone will result will result in serious injuries and deaths every year, as automobiles are further downsized to meet the arbitrary 54.5 mpg requirement.

The new anti-fracking rules will impact electricity generation, reliability and prices,  which in turn affects the cost of everything.

For those 26 states that depend on coal based power generation, it will be all pain and no gain.

According to the Wall Street Journal, a White House letter to House Speaker John Boehner inadvertently acknowledged that the EPA is still working on new regulations that the agency calculates will impose $105 billion in additional regulatory burdens and compliance costs.  If Obama wins a second term, the imposition of the $105 billion regulatory burdens, along with other regulations as yet unveiled will be imposed.

When you include the number of discouraged workers who have given up looking for jobs, and the people who have been forced to work fewer hours or temporary jobs, our true unemployment rate is 19% and double that for black and Hispanics.  Our labor force participation rate is at a 30 year low and 2011’s economic growth rate was a dismal 1.7%.  And yet, the EPA and Obama continue their “green agenda” to ensure that this unconscionable situation will only get worse.

In fact, the only welfare EPA’s rules and regulations will ensure is the expansion of our welfare rolls, unemployment lines and already record-setting food stamp programs.