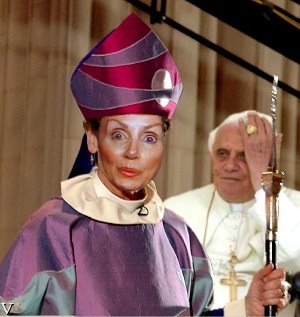 Is Pelosi suffering from mini strokes or has all that botox seeped into her brain?

In her infinite wisdom, she  has decided that those 43 Catholic institutions that dared to file those nasty little lawsuits challenging HHS mandates requiring them to cover sterilizations, contraceptives and abortion inducing drugs, are not speaking for  “the entire Catholic Church.  Those people have a right to sue but I don’t think they’re speaking as ‘ex cathedra’ for the Catholic Church.”

‘Ex cathedra’ refers to the infallible authority that Catholics believe the pope exerts when he makes a formal and solemn declaration on matters of faith and morals.  It is not a term to describe lawsuits the church files in civilian courts.

But in Nancy’s defense she may have well missed,  forgotten, or just misunderstood the 1993 Pope John Paul II explanation of ‘ex cathedra’ authority of the pope.

“When the Roman Pontiff speaks ex cathedra, that is, when in exercising his office as shepherd and teacher of all Christians he defines with his supreme apostolic authority that a doctrine on faith and morals is to be held by the whole church, through the divine assistance promised him in the person of St. Peter, he enjoys that infallibility with which the divine Redeemer wished to endow his church in defining a doctrine on faith and morals.”

The Catholic Church teaches that sterilization, artificial contraception and abortion are morally wrong.    The Archdiocese of D.C. stated in the lawsuit that  the Church views these practices as “immoral and prohibits Catholic organizations from condoning or facilitating those practices. The government may not interfere with or otherwise question the final decision of the Catholic Church that its religious organizations must abide by these views.  Plaintiffs have therefore made the internal decision that the health plans they offer to their employees may not cover, subsidize, or facilitate abortion, sterilization, or contraception.  The U.S. government mandate interferes with Plaintiffs’ internal decisions concerning their structure and mission by requiring them to facilitate practices that directly conflict with Catholic beliefs.”

Nancy has always chosen to ignore her Catholic faith’s teaching on abortion.  She thinks that partial birth abortion is “a procedure that any parent would want her daughter to have access to. . .”  Right, every parent dreams that their daughter will murder their grandchild as it is being born.

Unfortunately, this isn’t the first time that Nancy has showed signs of mini strokes.  You might remember her 2010 explanation of her favorite word – “the Word.”

“My favorite word is the Word, is the Word.  And that is everything.  It says it all for us.  And you know the biblical reference, you know the Gospel reference of the Word.  And that Word is, we have to give voice to what that means in terms of public policy that would be in keeping with the values of the Word.  The Word.  Isn’t it a beautiful word when you think of it?  It just covers everything.  The Word.  Fill it in with anything you want  (which Nancy does, often).  But, of course, we know it means ‘The Word was made flesh and dwelt amongst us’.  And that’s the great mystery of our faith.  He will come again.  He will come again.  So, we have to make sure we’re prepared to answer in this life, or otherwise, as to how we have measured up.”

Wow!  I bet even God is  still scratching his head over that explanation!

Nancy needs to spend a little  more time actually reading the “Word” and then she might not be so confused.