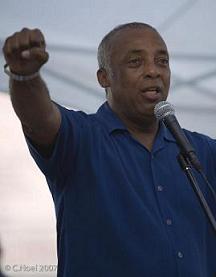 NY City Councilman Charles Barron is close to winning the Democratic nomination for Congress in New York’s 8th District.  Is this the kind of man the Democratic party really wants to be associated with?

Barron, a former Black Panther,  who once urged Blacks to vote for him so that “more elected revolutionaries” could join city government, has close ties to the New Black Panther Party and has bonded with its  mostly anti-Semitic and racist leadership.  He sings the praises of Louis Farrakhan who, according to Barron, is “not a racist.”  Right, how could Farrakhan be a racist – he only hates Jews and Whites.

Barron, who doesn’t consider himself a racist either  once called a fellow Jewish Councilman a “coward” whose actions were only to “satisfy the Jewish lobby,”   said that Blacks, not Jews, are the “real” Semites,  called the Israeli government the “biggest terrorists in the world,”  and said the state of Israel should never have been created.   He was also involved with the pro-Hamas Viva Palestine Convoy to Gaza.

At a New Black Panther rally where they were selling t-shirts that read “kill whitey” Barron said he’d like to go up to the closest white person and slap him in the face for his own mental health.

A New York Daily article referred to Barron as a relic of a bitter bygone era, a former Black Panther who plays a one-note trumpet of racial grievance and a malignant clown.

Barron has also received  support from the Public Workers Unions and an endorsement from retiring incumbent Representative Ed Town.

With these racists Black Democrats in their midst,  Angela Rye, Executive Director of the Congressional Black Caucus is still attempting to play conservative opposition to Obama as racism.  According to her, even  calling Obama “cool” is racist.    Do these people ever listen to themselves?

Have the Democratic party and the labor unions slid so far off the “norm scale” that they could be proud to help elect this racist?