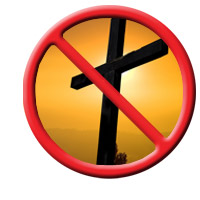 The Jerusalem Syndrome by Robert F. Boyd appeared in the Roanoke Times on June 2, 2012.  In his commentary editorial, Professor Boyd writes:

I am dumbfounded as to why the editors at the Roanoke Times continue to publish letters to the editor about God, the Bible and Christian values.  I refer specifically to those that equate the demise of our civilization with such baseless reasons as not placing placards of the Ten Commandments in public places, accepting same-sex marriage, allowing gays in the military, permitting females to be priests, homosexuality in society, accepting the Muslim religion.

For those of you who talk to God but get no response, I suggest you go to Jerusalem during Easter, Christmas or Passover. God appears to be especially chatty during those peak religious seasons. . .They give the appearance of being discombobulated and act in irrational ways, particularly after visiting the Wailing Wall, Church of the Holy Sepulcher or Church of the Nativity in Bethlehem.  Many have said they heard the voice of God, saw the face of God or heard angels singing.  Psychiatrists have labeled it the Jerusalem Syndrome. . .Health officials in Jerusalem say the best treatment is: “Get the hell out of Jerusalem.”. . .

In other words, people who think they hear voices, see God, angels or other religious oriented scenes and demonstrate irrational behavior are unable to use a brain circuit that would relay a message that their emotions may be bonkers.  If, as readers of The Times suggest, our country is doomed because we have removed God from our documents as well as our lives, what’s going on in all those churches in the U.S.? . . .  One would think that with all those prayers being relayed to God, he/she would be able to help us solve at least a few of the problems facing this country. . .

Although some of the religiously oriented letters make me smile, I am baffled as to why any respected publisher would print so many of these letters that defy logic.  I have said this before and I’ll say it again: Put the religious articles on a separate page called Religion.  If we can separate religion from government, why can’t we separate the blind faith of religion from reality?. . .

You can read Professor Boyd’s commentary in full at this link.

It never ceases to amaze me that Secular Humanist believe they have all the answers.  They reject the existence of God, the existence of any spiritual dimension or afterlife, preferring to believe that nature is all that exists.   Atheism leads most Humanists to adopt ethical relativism, a belief that no asolute moral code exists and man must therefore adjust his ethical standard in any given situation to his own judgment.  Humanist Max Hocutt says that human beings “may and do make up their own rules. . .Morality is not discovered, it is made.”   It sounds like a very empty life to me.

While debating a response to Professor Boyd’s commentary I read a response from Dr. Dennis Garvin of Roanoke, “Reality and the Truth of God”  that pretty much expressed my own feelings.  You can read Dr. Garvin’s response in full at the link above.

He [Professor Boyd] describes the Jerusalem Syndrome, implying that people with “extreme religious devotion” have some aberrant brain activity.  This is based on PET scanning of the brain.  Such scans are interesting.  They can, for example, tell us if a person is listening to music and even whether they like the music.  These scans, however, cannot distinguish between a person who is looking at nude pictures of people of the opposite sex or if they are eating chocolate. . .Thus, their reliability in assessing brain circuitry during “irrational behavior” is somewhat suspect. . .

Jerusalem has one of the highest tourist numbers in the world, averaging 3.5 million annually, giving this syndrome a .003 percent incidence, much lower than the sunburn rate at a NASCAR race. . . I would submit that we would find the same PET scan activity in spectators at a WWF wrestling match, among ladies who go to a Bloomingdale’s lingerie sale with cans of Mace in their purses and among liberals who protest “The O’Reilly Factor”. . .These do not, in my estimation, constitute religious events.

The professor implies that corporate prayers in churches don’t seem to be impacting the problems facing our country.  He deduces this from the fact that people in churches do pray, and that we still seem to have problems, ergo, prayer doesn’t work.  I will explain this, using small words:

2.  God gave us the privilege of free will, which includes his not interfering when humans are gleefully soiling their own nests.

3.  Prayer may well be the one thing that has kept us from being worse off than we are.

4.  Faith-based organizations have been addressing the problems summarized by the professor with far greater success and lower overhead than their secular counterparts.

In closing, Boyd intones the usual vapid zinger to people of faith: “Take command of your life – either by continuing to follow a blind faith or by measuring that faith against the reality of your life and discover the truth.”

As a militant atheist until age 38, I grew up enough to assess God in regard to reality and truth.  I was startled to find that quantum physics, the study of light and Einstein’s law of time dilation support the Bible.

It is one thing to be a victim of poor scholarship; quite another to be proud of it.  As a start, I would suggest a book, “The Science of God” by Gerald Schroeder. The author received his Ph.D. from the Massachusetts Institute of Technology.  I would assume that this center of learning meets Boyd’s standards.

The Bible anticipated the Boyds of this world in 1 Corinthians: “For the message of the cross is foolishness to those who are perishing, but to us who are being saved it is the power of God.”

← Two Weeks For Freedom
Obama Cares only For Himself →