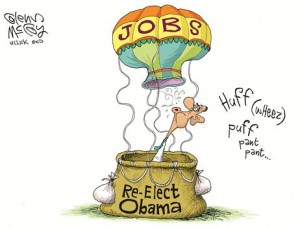 According to Obama he is the most miserly President in the last 60 years.  He claims to have prevented the “next great depression” with his spending stimulus and, anyway, it’s all Bush’s fault!

When speaking  a fundraiser in Baltimore, Obama pretty much dared anyone to prove he was the cause of the deficits.  “This notion that somehow we caused the deficits is just wrong.  It’s not true! And anybody who looks at the math will tell you it’s not true. . .I mean, press, go back, check, take a look at the numbers.”

Lets Do The Math

The tax cuts and the start of two wars occurred in 2001 and 2003.  By 2007 the nation’s budget deficit nearly disappeared and increased revenue receipts reached a record high.  Spending for both wars peaked in 2008.  Yet, the Obama administration has had 4 consecutive deficits in excess of $1 Trillion which dwarf the deficits he inherited.

Here is another inconvenient non-numerical fact for Obama:  He voluntarily extended the Bush tax cuts.  He can’t claim that the current tax rates are the source of our fiscal ills while also claiming that his deficits are somehow “structural.”  He could have refused to extend the Bush tax cuts if he believed his own words.  The cause of Obama’s deficits isn’t the Bush tax  cuts,  it is federal spending.

In 2007 the federal government spending totaled $2.73 Billion.  Today, in 2012, federal spending is projected to reach $3.8 Trillion.  That $1.1 Trillion increase has not produced the robust economic recovery Obama promised but did heap record amounts onto an already unsustainable national debt.

As November fast approaches, Obama becomes more desperate, so expect to hear much more scapegoating on his record.   But also know that the numbers he tells us to examine, refute his claims!

← From A DHS Insider
Hillary Wants To Be Pristine for 2016 →