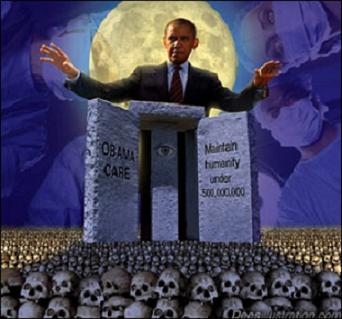 You know how much Obama loves British socialized medicine.  If Obamacare isn’t repealed or the Supreme Court doesn’t rule it unconstitutional,  America will soon follow the British health care system to euthanasia.

A British Professor, Patrick Pullicino,  claims  that Britian’s socialized medicine is being used to end the lives of thousands of elderly hospital patients each year  because  they are difficult to manage or to free up beds. Pullicino is a consultant neurologist for East Kent Hospitals and Professor of Clinical Neurosciences at the University of Kent.

The Liverpool Care Pathway (LCP), a method of looking after terminally ill patients is used in British hospitals across the country.  It is designed only to come into play when doctors believe it is impossible for a patient to recover and death is imminent.  LCP was developed at the Marie Curie hospice with the intention of making the last days and hours of cancer suffers as decent and painless as possible but it rapidly became  fashionable  and was approved for hospitals by the National Institute for Health and Clinical Excellence in 2004.  By 2006 it had been adopted in hospitals across the country.  It went  from cancer patients to all patients.

Several experts, including Peter Millard, emeritus professor of geriatrics at the University of London and Dr. Peter Hargreaves, a palliative care  consultant at St Luke’s cancer center in Surry, warned at the time that it was “backdoor euthanasia” being used to cut health care costs for the treatment of vulnerable patients.

The Pathway to Death  can include withdrawal of treatment, including the provision of water and nourishment by tube, and “heavy” sedation which on average brings a patient to death in 33 hours.

Professor Pullicino said the lack of evidence for even initiating LCP makes it an assisted death pathway rather than a care pathway.  “Very likely many elderly patients who could live substantially longer are being killed by the LCP.  Patients are frequently put on the “pathway” without a proper analysis of their condition.  Predicted death in a time frame of three to four days, or even at any other specific time is not scientifically possible. . .The personal views of the doctor or other medical team members of perceived quality of life or low likelihood of a good outcome are probably central in putting a patient on the LCP.  If we accept the LCP, we accept that euthanasia is part of the standard way of dying. . .”

In 2007-08 16.5% of deaths in Britain resulted from continuous deep sedation, which is twice the rate of the Netherlands with its notorious culture of death and legalized euthanasia.   Professor Pullicino said that today, around 29% or 130,000  patients each year die on LCP.

As an example, Professor Pullicino cited the case of a 71 year old who was admitted suffering from pneumonia and epilepsy, who was put on the LCP by a doctor covering a weekend shift.  Pullicino said he returned to work after the weekend to find the patient unresponsive, on morphine via a syringe driver and a family upset because they had not agreed to place him on LCP. He  removed the patient from the LCP, despite significant resistance. The patient’s  seizures were put under control and four weeks later he was discharged home to his family.   Pullicino said that “the patient’s extra 14 months of life did come at considerable cost to the NHS and the taxpayer since he needed extensive support with a wheelchair, ramps and nursing.

According to a spokesperson for the Department of Health, the LCP is “not euthanasia. . .a patient’s condition is monitored at least every four hours and, if a patient improves, they are taken off the LCP and given whatever treatments best suit their new needs.”

If you prevent the patient from receiving any treatment, cut off water and nourishment,  then heavily drug them with morphine, how could anyone  reasonably expect a patient to get better?    Patients can become semi-conscious or confused as a result of heavy sedation, especially if they’re dehydrated, so it is likely that not too many escape the socialized “Pathway to Death.”

“Inch by inch, the state is taking over, not only the everyday minutiae of how we live our lives, but also how long those lives should be.  America has risen up against Obama’s ‘death panel’ [but] it is unlikely the British have the will to exercise the same instinct of self-preservation by halting this drift towards the unthinkable.”    Gerald Warner, The Telegraph, 2009