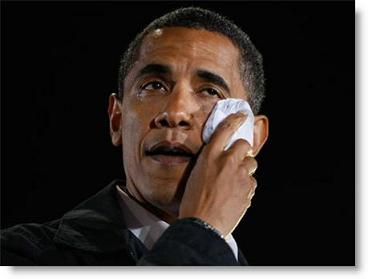 On the 26th Obama was campaigning in Atlanta trying to milk it for money.  He whined to his audience that those mean old nasty (racists) Republicans were outspending him.

All that campaign money didn’t bother him in 2008 when he was the one outspending those nasty old Republicans.

Obama’s money woes speak volumes.  We haven’t heard the boast that “Obama will have $1 billion to run on” for quite a while.   You won’t hear this in the drive-by media but Obama will  not reach $1 billion at the rate he is progressing.   Just week Obama was  asking people who are having birthdays or getting married or celebrating other events where monetary gifts are customary to redirect the money to his campaign.    Given this fact, how long will it be before legions of Obama’s sycophants stand on street corners shaking tin cans with “Forward” on them?

So far Obama has attended over 140 fundraisers, breaking all records for these events by a sitting President.  He has abandoned any pretense that he is interested in governing.  He spends his time going from one event to the other, only stopping to play golf at a record rate as well.   All these fundraising events are not bringing in the money.  His campaign is now begging small donors for as little as $3.00 and his big donors are backing away.

Even George Soros doesn’t have the money Sheldon Adelson and the Koch brothers have.  The likely addition of Donald Trump’s contributions will further smother the few financial resources Obama will have.

Rich leftists have not continued to stay rich by being stupid.   After all, throwing  good money after bad isn’t smart.