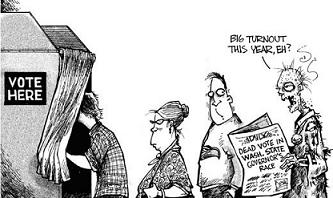 Wednesday the 27th, U.S. District Judge Robert Hinkle ruled that there was nothing in the federal voting laws that prevented Florida from identifying ineligible voters, even if it is close to their upcoming election.

Federal laws are designed to block states from removing eligible voters close to an election –  not to block voters who should never been allowed to cast ballots in the first place.  Hinkle said that “questioning someone’s citizenship” is not a trivial matter but non-citizens should not be allowed to vote.  “People need to know we’re running an honest election.”

States who suspended purging their voter rolls of ineligible voters can now get back to work.

The Obama campaign is contemplating their next move.  With the dead,  fraudulent voters, felons, and illegal aliens now unable to vote, at least in Florida, Obama may have Holder appeal Hinkle’s decision.

Florida is not yet out of the woods as several voting rights groups (liberal Democrats, I’m sure) have filed heir own lawsuits in Tampa and Miami.

Democratic activist Gigi Gaston made a video “We Will Not Be Silenced” documenting widespread voter fraud committed by Obama supporters during the 2008 Democratic primary election just to secure Obama’s nomination over Hillary Clinton.

Democrats insist there is no voter fraud.  Check out the video:

The Pew Center reported that more than 1.8 million dead voters nationwide are currently regstered to vote and at least 24 million registrations are either invalid or inaccurate.  And, remember, Acorn was fined for registering the dead in 2008.

← What Hispanics Want
Taxing the Rich and Foreign Oil →