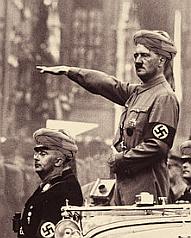 “The Global Islamic Civilization: The Power of a Nation Revived” is the brainchild of the United Muslim Nations International, (UNMI) a group led by Sheik Farook al-Mohammedi.  It outlines a plan for Muslim world domination and the reestablishment of the Caliphate.  Not a lot is known about the group or al-Mohammedi other than he is an extremist with a small following but still dangerous.

According to al-Mohammedi, “Christianity should be destroyed and wiped from the face of the earth.  It is an evil demonic and anti-Christ system, all Christians are in complete ignorance.  Islamic Power has returned upon the face of the earth and the Revived Global Caliphate has set eyes on the West to once and for all rid the world of Christianity and there is nothing you can do about it. I have pledged and made a firm promise to the caliphate of the United Muslim Nations International organization that I will do my utmost to Islamize all of the West within a short period of time.”

“Islam is the only true religion enjoins upon mankind total submission to the will of allah….Western resistence…is futile….None will resist, you will submit! Islam will conquer the hearts of all Christendom, this is a definite reality….”

But Christians worldwide have nothing to worry about.  Early into Obama’s reign, he commissioned his left-wing followers at the Department of Defense to pay for a study that claimed that  “Islamists are not an aggressive offensive foe seeking domination and conquest of unbelievers as is commonly assumed.”   Pay no attention to that person behind the curtain!   Islam loves us!   You’re safe!

Al-Mohammedi  must have missed the report because he said

I would imagine that the group that prepared that little bit of fluff for the Department of Defense, had they been around in the 1930s and 40s, would have declared Hitler a joke cause there was no way he could possibly hold such grandiose ideas of  annihilating the Jewish race.

← Who Am I?
The Impact of ObamaCare on Job Creators and The Economy →