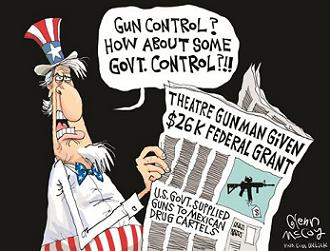 Obama is calling for a “common sense” approach to assault rifles in light of last Friday’s mass shooting in Aurora, Colorado.  “The mentally imbalanced individual should not be able to get their hands on such weapons. . .I like most Americans, believe that the 2nd Amendment guarantees an individual the right to bear arms. . .I believe the majority of gun owners would agree we should do everything possible to prevent criminals and fugitives from purchasing weapons and we should check someone’s criminal records before the check out a gun seller.”  Maybe the Obama administration should have thought of that before allowing BATF to institute “Fast & Furious.”

If Obama believes so strongly in the 2nd Amendment why is he doing everything in his power to force gun control through the U.N. Small Arms Treaty?  Is he saying he thinks everyone should have to go to the police or FBI and get pre-approved before being able to exercise their right to buy a firearm?  How would that be different from the background check you are subjected to at a gun shop?

In order to purchase a gun from a licensed gun dealer, you have to fill out ATF 4473  stating that you are a citizen, providing your date of birth, social security number, address and answer such questions as  have you ever been convicted of a felony or been indicted for a felony and or have ever been adjudicated mentally defective, are you not a fugitive, are you in the country illegally  etc.   Before you can walk out of  with your gun,   the seller has to call  the State police (in Virginia) which verifies  the information you provided with the BATF data base.  Now, if you purchase a gun from a private owner you are not subjected to the ATF inquisition.  Criminals are not subjected to the background check either because they usually just steal their weapons or buy  them on the black market.  And, for all we know, some of those illegal weapon purchases may have come from the  BATF “Fast & Furious” operation.

What does it mean to be mentally imbalanced?

The British Medical Journal describes mentally unbalanced as “a large group of abnormalities ranging from mild eccentricity sometimes seen in artists to severe forms of antisocial psychopathy, drug addiction and alcoholism.”  Our own government funded a study that concluded that “conservatives can be explained psychologically as a set of neuroses rooted in fear and aggression, dogmatism and the intolerance of ambiguity.”  Think there might have been a little bias there?  The BBC claims that Nationalists are mentally challenged.  Our own government thinks that distrusting the government is a mental illness –  just ask David Sarti, a survivalist from Tennessee who had  his guns confiscated.

What it boils down to is the shooting in Aurora has, for the anti-gun crowd, opened a new avenue for gun confiscation.  If you tell your doctor you’re depressed, if you have a chemical imbalance that causes depression, if you’re overly sad  because a loved one passed away, if you’re nervous or fearful, unhappy, frustrated, angry (which covers most of the far left crowd), conservative or a Christian, you’re most likely mentally imbalanced.   If you don’t believe in same sex marriage, if you think Obama is out to destroy the country,  if you are not in love with Socialism, if you stockpile food, if you like Ron Paul,  if you are not a card carrying Marxists – you are  definitely unbalanced and shouldn’t own a firearm.  Starting to get the drift?

Getting the facts straight:

Obama continued: “I believe that a lot of gun owners would agree that AK 47’s belong in the hands of soldiers not in the hands of criminals.  That they belong on the battlefield of war, not on the streets of our cities.”

Obama needs to do a little fact checking before opening his mouth.   The Aurora shooter used an AR15 which is semi-automatic, meaning that for every bullet fired, the trigger had to be pulled.  American soldiers use AR 16s which are fully automatic.  AK47 is  more of a generic term for all 7.62 cal. AKs.  And, the  AK47 hasn’t been used exclusively by any army since Vietnam.

The far left gun haters  are pulling out all stops  to convince the average citizen that stricter U.S. laws are  a must to protect us against deranged  armed assailants.  Unfortuntely, those deranged armed assailants don’t obey laws – that’s why they call them criminals!  I, on the other hand,  know a perfect way to stop those deranged assailants that doesn’t require a single new law.   Arm all adult American citizens.

Mayor’s Against Illegal Guns released the findings of a survey by GOP Pollster and Fox News commentator Frank Luntz that they claim proves beyond any doubt that NRA members and gun owners overwhelmingly support a variety of government laws designed to prevent those deemed “dangerous” from owning guns.

It’s all in how you pose the question!  If someone called me and asked should mentally deranged individuals be able to own guns, of course I am going to say no.  But do I think the government should decide who is mentally imbalanced or dangerous?   NO WAY.   The government has an agenda!  They want us unarmed and defenseless!