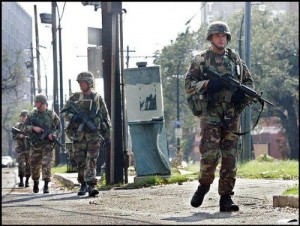 Informants and military personnel are coming forth anonymously to confirm that martial law “is right around the corner.” However, right now we are under a silent martial law and citizens are reporting strange and unexplainable activity from the US armed forces and multiple federal agencies that point to a covert preparatory operation to completely lock down America in the very near future.

Sources from multiple locations across the nation have independently confirmed that the US military are repositioning soldiers in conjunction with allied foreign troops in the initial stages of martial law.

The US military are secretly moving massive amounts of “equipment” across the country consistently for more than a year. In Phoenix, Arizona, tractor-trailers transporting tanks on public highways have been spotted. One witness stated that he saw these flatbeds multiple times in the month of June. Eye witness reports are coming primarily from the northern and southern Border States.

Peter Santilli, an ex-marine informant who was a specialist in aviation deployed weapons, explains that a refrigerated truck, allocated by the administration department on base, was directed to the commissary, where the unsuspecting driver believed that he was transporting food. The weapon was placed at the head of the trailer, and covered up with either food stores (like cans of soup) or body bags. In the event that the truck is stopped en route, the weapon would be well hidden and go undetected by inspectors on the public highways.

Santilli, who was assigned to ride in the cab of the truck with the driver, says that his orders were to make sure the truck arrived at its destination. If there were problems concerning potential civil unrest, he was to radio into his superiors for aid by either air or ground support. Should the situation warrant serious attention; crowd control methods would be implemented.

One possible scenario was the use of cluster bomb units (CBUs) that will emit upon detonation, a “sleep and kill” chemical weapon that will not disturb infrastructure, but is lethal to all living things within the effected zone. Santilli describes these particular 3 unit CBUs as shaped like water-heaters with a coned top and plunger-like device. Once deployed in the air, a parachute assists these CBUs to the targeted area. And when detonated, a deadly chemical gas will kill every human and animal in the specified cordoned area.

The acquisition of armory by the Department of Homeland Security (DHS) and contracts for bullet-proof glass for check-point booths to be positioned strategically throughout the nation on public highways have heightened awareness that the US government is preparing for a well-planned domestic military action. DHS armored vehicles have been sighted on highways in Kentucky.

When citizens attempt to capture the activity on film, some have their cameras confiscated; sometimes after a physical altercation. On Google Maps, where known military bases were once visible, some strategic areas are now blurred out.

John (a pseudonym) was contracted by DHS to “fill in caves, mines and block trails”. Now these measures are being stepped up, as independent contractors are being brought to mountainous regions and told to block all entrances into the mountains, by way of caves and other areas where people could possibly “hide out in the hills” during a riot situation under declaration of martial law.

Forested areas in states like Montana, Missouri and Arkansas are being closed to the public while military activity is being witnessed by locals. Those commercially contracted civilians working in these areas are allocated parallel shifts and compartmentalized projects to provide for an intelligence controlled operation.

One informant relayed an incident where he was detained on a forest road by unidentified “paramilitary” officials that seized his rifle from the rack on the back of his vehicle.

Another source said that while traveling in a national forest park, he and his party were met by what appeared to be a military police officer who demanded that they turn back.

Residents in Pine Mountain, Georgia and Spruce Mountain, Nevada have had confrontations with US armed forces. When travelling in public national forested areas, military police with “automatic weapons” say that locals cannot gather wood in surrounding forested spaces (as they have traditionally done for decades). One man in particular had his rifle forcibly confiscated by unidentified armed men.

On dirt roads leading to the Lassen National Forest reserve, paving is being laid over the gravel roads. The locals know that secret underground drilling or tunneling is being conducted. Whenever they enter the park, they are quickly escorted out by heavily armed and quite menacing persons. Even once abandoned logging roads are beginning to see activity again.

Information coming out of reserve units in Arizona is that they are being put on official alert. Military personnel are being told by superiors not to schedule vacations and prepare to be on-call and on-duty indefinitely. According to one informant, these new assignments are not providing for deployment overseas, but rather for domestic service with the intimation that these deployments may have relation to civil unrest expectations.

In Lake Havasu, Arizona, and Colorado Springs as well as Fort Collins, Colorado, locals are coming forth to report that local fires may have been lit by foreign troops; specifically Russian forces that have been spotted in the area. These Russian troops are believed to be stationed at Fort Carson, Colorado.

Military drills, a.k.a. urban warfare, have been played out in many states by the Pentagon and other branches of the US armed forces.

In Plainville and Worchester, Massachusetts, surprised citizens witnessed last “Wednesday evening. . . military helicopters descended on the vacant Wood School [in] the late hours of the night in a scene that might have appeared to simulate the United States’ special forces attack on Osama bin Laden’s compound last year.” Many locals had their homes swooped down upon by black helicopters in an obvious display of military dominance over the general public.

Residents saw helicopters landing near Worcester Memorial Auditorium in Lincoln Square. Local newspapers were flooded with “telephone calls and e-mails . . . curious about what was happening.” The local police claim they were unaware of the drills.

A US Army spokeswoman made a half-hearted apology for “any inconvenience or unforeseen disturbance.”

In Hollywood, Florida, DHS and the Hollywood Police Department have taken part in Master Rappelling training exercises (MPTE) with Blackhawk helicopters scheduled over various government-owned buildings. Details concerning the drills are being kept from the public for “security reasons”.

MPTE are special operations to teach law enforcement and military techniques in tactical rope and rappelling skills that can be used in helicopter deployment and advanced tactical training.

Just this month, foreign troops were caught at a Wal-Mart . They were travelling in what were described as “large government vans”.

Law-enforcement battalions have been created out of Camp Pendleton, California, consisting of specialized military police (SMPs) that would be deployed to assist in any event of civil disturbance, handling of detainees, use biometrics to identify suspects and conduct forensic work. Their assistance is not limited to conducting DUIs and writing speeding tickets in an effort to re-brand the Marine Corps as being more involved with average work now allocated to local law enforcement.

Moving around in white, unmarked vans, strange troops have been seen purchasing food and water at another Wal-Mart in Franklin, Indiana. Parading in military personnel fatigues where drone activity has been reported in Oklahoma City and black helicopters were spotted hovering over a construction site.

According to documents from the RAND Corporation, a planned event concerning a Police Stabilization Force within the US will be “a mix of military and police forces to deal with a range of threats.” The study explains:

Estimates are $637.3 million annually and including many federal agencies including: the US Marshals Service, the US Secret Service, the Bureau of International Narcotics and Law Enforcement Affairs (INL) in the Department of State, and the US Army’s Military Police.

There is a media blackout concerning the “state of emergency” (code for martial law) that Anaheim, California residents have been under since the murder of a man by local police.

While protests have been conducted, residents say that “outsiders” are infiltrating peaceful demonstrations to stir up violence and ensure local and military police action against them.

While city officials are gearing up for “another large incident” and “another riot” protesters are coming forth to voice their distain at the “infiltrators” that attended a protest that ended with the fatal shooting of two Latino men.

During protest marches in Anaheim, the white, unmarked vans have resurfaced. This time unidentified “police” detained protesters and placed them into these vans.

The increased activity across the nation in conjunction with the mounting citizen reports of seeing military on their streets, conducting urban warfare drills, and spotting foreign troops have prompted public interest in the US government’s plans to enact a full-scale martial law in America – expected by the end of this year.

The more attention that is brought to these sightings and the more people come forward with information, the safer the American public will be. The US military have orders to shoot and kill all dissenters. They are being trained to confiscate guns and detain people in “internment” or FEMA camps. For the sake of continuity of government, they are being told to turn on their own fellow Americans.   Source:  The Daily Sheeple

Obama and His Goonies Liberals Want and are Hoping to incite Rioting so [Obama] can cancel the election. Don’t let that happen!

← Operation Fast And Furious Was Meant To Supply Guns To The Sinaloa Cartel
Are Blacks Still Enslaved? →