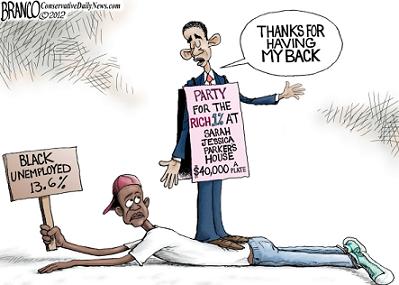 How does a former NAACP chapter president, a self proclaimed liberal who championed the likes of Al Sharpton and Jesse Jackson, end up in the hyper-conservative Tea Party?  C. L. Bryant shares his story in “Runaway Slave,” a new documentary playing in limited theaters.  Bryant, former pastor of a Texas Baptist church, depicts the conservative roots of the African American community and argues that a new Underground Railroad movement is necessary for liberation from entitlements.

“Twenty-three years ago when I was president of the NAACP in Garland, Texas, I was asked by the national office to speak at a pro-choice rally.  As a minister and person of faith, I could not reconcile that so I turned it down.  In doing so, my star that was rising in the NAACP began to take a decline.  They not only wanted to control me, they wanted to use me to control a block of people.  So I started on a conservative path.

The NAACP has been totally co-opted by progressive liberals and the far left part of the Democratic Party.  It’s been a thorough takeover of the organization.  When the organization was founded [in 1909], many black Americans were Republicans, and the organization was nonpartisan.  It was set up not only with black people, but many former abolitionists too.  But now the NAACP no longer is in tune to the value system of the people it was created to serve.”

Bryant said that for black people, unfortunately, “if you have a different political viewpoint, then you often become evil in the sight of the group.  As it is portrayed in the film, it’s tied to tribalism.   African Americans feel that way because they do not realize that we as a people have evolved, like every other ethnic group that came to this country.  Even though ours was very much involuntary, we still were brought to these shores and we have been emancipated here in America.  And we now have the same opportunities as anyone else.  But many black people still are crippled by the rhetoric of people like Al Sharpton and Jesse Jackson, who want to keep them co-dependent upon the government policies and programs of the Great Society and Lyndon Johnson.”

“I am a strong believer in the Judeo-Christian principles that shaped and formed our country, even though in the early years of our American existence those beliefs did not free my great-grandparents.  But those beliefs eventually shaped the consciousness of an American people that causes me to be able to speak the way I do today, as a free man.  I’m a representative of perhaps the greatest success story the world has even known  – the survival of a people who went through slavery, and now a person who is able to defend those same values that not only freed my great-grandparents but keeps me free now.  It’s those Christian values that not only free me, but keep many people in the world free.  As Christians, we’ve always defended the rights of others to practice their faith freely.  I want to make certain through exercising my faith that I pass along to everyone else in search of freedom those liberties, individual freedoms and strong Christian principles.

I am a black conservative who happens to vote for the Republican Party.  I am a Tea Partier, for certain, but I am a conservative first, as most black people are in their core.  They simply need to be reawakened.”

Bryant believes Obama understands the message he is spreading but “I think he has been conditioned to discount it, because all indications show us he is a socialist-learning president who believes in big government programs to be the cure all for the poor, the masses.  So what we see is the effect of big government, which as far as our movie is concerned is the new plantation. Bill Clinton had a very good idea for welfare that was working, and Obama has pretty much taken the teeth out of it.  There are people who legitimately need assistance, but there are always those who abuse it.  So there must be some type of reform because, evidently we’re not going to be able to sustain a welfare state.  Guidelines should be put in place for those who abuse the system for pleasure, those who like to drink and abuse themselves with things that are intoxicating.  That type of person doesn’t have the government’s foot on his neck, the white man’s foot on his neck, or society’s foot on  his neck.  His own foot is on his neck.   There are many guidelines we can explore as far as putting people to work in lieu of welfare.”

Bryant said he was inspired to make “Runaway Slave” because he realized that our conversation about race has not changed over the last 40 years.  “Here we were still talking about being angry as black folks, being angry as Americans, and being racially divided down color lines and political lines.  Black peoples’ liberties and civil rights have been championed by and large by the Republican Party, but blacks are told that Republicans are evil and that conservative ideas are evil.  We’re told that by people who are controlled by the progressive left.  But that’s not true.  And because we don’t read for ourselves the history that brought us to where we are today, we miss out on where we have come from and how we actually got there.

Race relations has to discussed intellectually instead of emotionally, but there has to be a conversation.   The movie was made to take the conversation in a different direction.  Race will never go away as long as there are people of different colors.  But at least we can deal with it in a way that is beneficial instead of destructive.

Black anger is directed at those perceived to be the enemy – conservatives and Republicans.  Now, the question has to be, “Why is it directed toward them and not those who are actually the problem?  If you ask the average black child who started the KKK, they would say it was the Republican Party.  If you were to ask the average black person whether liberals or conservatives portray their values the most, they would say liberals.  It’s an indication that the progressive liberals have been the most successful in co-opting not only the black mindset in schools, but also the black church and the black preacher.  And conservatives have not done a very good job at telling their side of the story. . .People in the black community are thirsty for something else.  We have tried the Democratic Party for 60 years, and we’re still angry, still enslaved, still unemployed.  Children are at an all-time high dropout rate.  Abortions are rampant.  So conservative should see a golden opportunity to reach out to those who feel they have been left out from under the umbrella of conservatism.”

You can read  Bryant’s interview in full at this link.