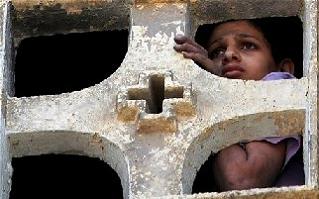 Egypt:   An image of a copy of the leaflet  appeared on El Fegr’s website.  Titled “An Urgent and Important Notice,”  it begins by calling on “all brothers ad sisters” to “kill or physically attack the enemies of the religion of Allah – the Christians in all of Egypt’s provinces, the slaves of the Cross, Allah’s curse upon them. . .”  The leaflet included the names and contact points for those Muslims who murder Coptic Christians to collect their reward.

This genocide has been called until Egypt’s Christians “return to the truth”.  Translation:  All Christians must convert or die!   So much for the religion of peace.

Hours after the leaflets were distributed the Coptic Solidarity reported that Christian Copts in Upper Egypt were under attack.  Christians were being beaten, their businesses set on fire and their properties plundered.  The attackers let everyone know that “any Christian who dares to leave his house will be killed.”

This in itself is testimony to how safe the jihadi organizations of today’s Egypt  feel under the Muslim Brotherhood’s control  [President Muhammad Morsi].    But it is not only the Christians who have to  worry about sharia law.

An Egyptian Muslim posted a YouTube video of himself cursing Islam and the Koran, then tearing it to pieces and throwing it in the garbage.   In the video protest against sharia law, a young Egyptian male  said that Egypt had made the tearing of the Quran such a big and dangerous thing and that they could threaten him but he wanted to prove to them that they are nothing.   You can see the video and read his remarks at this link.

On a recent talk show on Al Hafiz channel dealing with this young man and the fact that he tore up a Quran, Dr. Mahmoud Sha’ban said that someone like him must receive the punishment he deserves – and that punishment is death.  The young man was an apostate. . .”It is clear from what he says that he is a Muslim, and must be killed as an apostate.  As for that act itself, it is an infidel act, and he deserves to be struck by the sword in a public place and as soon as possible.  It must be announced and photographed and disseminated among the people, so that all the people may know that we respect our Quran and its words from Allah, and whoever insults it, receives his punishment from Allah. . .”

Another guest, Sheikh Abdul Mohsin said “I support Mahmoud that this man must be killed fast, that he may be an example to others, so that all learn that we have reached a new phase in respecting Islam and the holy sanctity of the Quran and Sunna.  This man has become an apostate and must suffer the penalty in front of the people.”

Another guest, Dr. Abdullah was critical of the first two scholars but not because they called for the man’s death but because, by focusing on the fact that the man had apostatized, it seemed as if they were exonerating non-Muslims:  “the issue of killing him is not limited to his being a Muslim and then apostatizing.  No, it is known to us from the Sharia that whoever insults the Prophet or tears the Quran, his judgment is death – whether he’s a Muslim or non-Muslim.”

When Republicans called for Obama to cut off financial aid to Egypt, Senator John Kerry, D-MA, sided with Obama.   “Egypt remains a key partner for the U.S., a leader in the region and a bellweather for the long term meaning of the Arab Spring.  Obviously,  American concerns about the Muslim Brotherhood’s past statements and positions are widely shared and well understood.  But, it would be a mistake for us to pull back from our engagement with a free and democratic Egypt.  This is a time to test intentions, not to prejudge them.”

The  “Arab Spring” that Obama was oh so happy to support has turned into a “bloody summer,” at least for Coptic Christians.  American Christians should keep this in mind when they cast their vote in November.