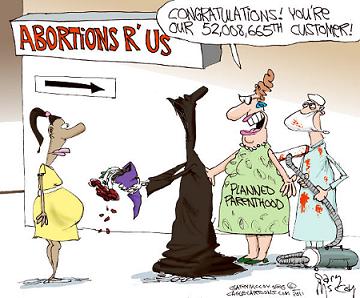 Tuesday, during the Democratic Party Convention, a small group of liberals gathered to defend Obama’s contraception mandate and “not allow Conservative politicians and religious leaders to redefine the meaning of religious liberty.”

Sara Hutchinson of Catholics for Choice, enlightened the “crowd” of around five with her definition of real religious freedom – “the right to be respected as a moral decision maker, free to follow one’s own conscience and religious beliefs.”  “The real threat today is not to religious liberty of the Catholic hierarchy but to the freedom of conscience of the rest of America’s Catholics.”

When someone asked Sara about an individual business owner – never fear – she had an answer.  “You are serving as an institution in that capacity” pointing out that business owners should not have religious freedom protections.

In “Abortion:  A Guide To Making Ethical Choices”,  Maguire and his wife wrote: “There is no clear Biblical teaching prohibiting abortion. . .no one knows God’s mind. . .It all depends on how you look at it; ethics are adjustable, depending on your circumstances. . .if you believe that the fetus is a person. . .if you also feel that abortion is the most moral choice. . .trust in God to take care of the fetus. . .”

Harry Knox, the Head of Religious Coalition for Reproductive Choice agreed with Ms. Hutchinson.   Knox was  on Obama’s Faith Based and Neighborhood Partnerships Advisory Council.    “The first rule they teach you in pastoral care class is that it’s about empowering the individual to make the right decision for themselves.  After that your role as a pastor is to be quiet.”    Knox is perfectly fine with a woman’s right to abort.  “No one in the abortion rights community, the reproductive justice community, believes in imposing their views on others.”

It is easy to see why Knox would support Hutchinson against the Catholic Church for there is no love lost between the two.  Knox a former Methodist minister who is gay, has made numerous slightly bigoted statements about the Church and the Pope.

The Religious Coalition for Reproductive Choice is a loose coalition of clergy, Churches and organizations who believe that reproductive rights are grounded in centuries of sacred texts.  This group equates reproductive rights to social justice and stands for pro-choice values against the “Religious Right” assault on mainstream American Values.     Members include the Episcopal Church USA, Methodist Federation for Social Action, the Society for Humanistic Judaism, the Presbyterian Church USA, United Church of Christ; United Methodist Church, Unitarian Universalists, Catholics For Choice,   Christian Lesbians Out, and the YWCA USA to name just a few.  Most of these are also members of the World Council and  the National Council of anything goes Churches.

They support abortion clinics and lobby for unfettered access to abortions, as well as advise clergy on how to advocate for abortion in their churches, communities and local governments.   They also offer numerous printed material such as “Prayerfully Pro-Choice: Resources for Worship” specifically for clergy who support abortions and want to lead  faith oriented experiences and rituals that affirm their beliefs.  Materials included are sample prayers, sermons, outlines for worship services and creedal statements.

Robert George, a Catholic and a professor of jurisprudence at Princeton describes Hutchinson’s gathering as “silly as well as ideological.”

It is easy to see that the primary purpose of these  two groups is the destruction of the Catholic Church.  Normally, when someone disagrees with the doctrines of a particular church, they just leave and find another church.  Hutchinson and Knox and their far left ilk  are more inclined to wipe it off the face of the earth!

← Government at Work. They Steal!
DNC Platform: Shoving America Off A Cliff →