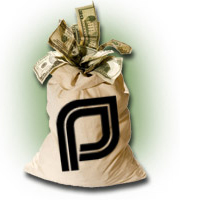 Cecile Richards, mouthpiece for Murder, Inc. is working hard to keep Obama in office.   Planned Parenthood is sponsoring a “Magical Mystery Bus Tour” to help Obama win re-election.   “Planned Parenthood sees firsthand the people who are being hurt by policies that attack women’s health, so we know why this election matters so much. . .Through this unprecedented bus tour, voters will hear directly from women in their own communities who would be hurt by policies that politicians like Mitt Romney support.”

Those policies that Richards is  so concerned about is the  support for the right for an unborn baby to live and eliminating taxpayer funding for abortion.

For Richards and the rest of the culture of death, this  Magical Bus Tour is their last hope to continue the funneling of taxpayer dollars into their coffers.  That and the   $3.2 million of taxpayer dollars they plan to spend on ads and door-to-door campaigning to attack  pro-life views and  Mitt Romney.

Over the past few months, the ties between Obama and Murder, Inc have become evident.  Just prior to the HHS abortion mandate,  Obama called Cecile Richards into his inner circle to advise him on how and when to issue the mandate.  And, after the mandate was issued, Obama selected Tait Sye, the former Planned Parenthood media director, to serve as deputy assistant secretary for public affairs at HHS.

Obama has also been using his campaign to talk up the “virtues” of Murder, Inc.   “In this election, on every single challenge we face, you’ve got the final say. . .You can decide that instead of restricting access to birth control or defund Planned Parenthood, we should make sure that in this country, women control their own health care choices. . .”   Translation:  If we don’t continue to provide taxpayer money to Murder, Inc., women might have to carry their baby to full term.   What any awful option.

Obama and Murder, Inc. try to downplay how much of Planned Parenthood  services to women are about abortions.   Check out the chart below:   In  2008, 96.3% of their “services” to pregnant women were abortions and only 3.7% were for adoption referrals and prenatal care. 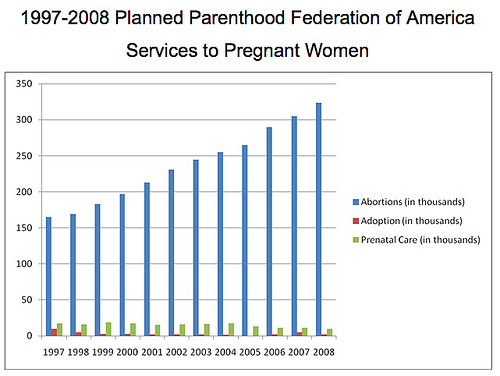 To be fair, Richards isn’t the only one clinging to Obama in an attempt to get all she can, financially and otherwise, from people who share her appetite for the culture of death.  Just recently, members of Code Pink showed up in costume on Capital Hill to demand the next logical “women’s health provisions: free abortions on demand  –  an expansion of ObamaCare to cover abortions for women during any state of pregnancy, for any reason.

The celebration of death at the  Democratic Party Convention was muted when Cardinal Dolan gave his closing benediction.   You remember Cardinal Dolan –   who much like God and support for Israel were kicked out of the convention but later reinstated without support of the delegates when party leaders feared a backlash.   Fearing the loss of more Catholic votes, Dolan was invited to give the benediction at the convention.

In his closing benediction Dolan admonished Democrats with:  “Grant us the courage to defend life. . .wanting to be born, welcomed and protected. . .God grant us the right to life so we can chose liberty and happiness. . .Renew in all our people a profound respect for religious liberty, the first most cherished freedom. . .”    I am sure most of it fell on deaf ears.

Obama’s cavalier dismissal of the right to life of an innocent unborn baby should cause the hairs on the back of your neck to stand up.   Every other human right is necessarily derived from that most basic of rights  –  the right to life.  No nation can survive long when that basic right to life is denied to the most vulnerable among us.

Who will be next?  Like Hitler should we rid society of other unwanted, unproductive elements of life?  The severely disabled, the emotionally disabled, the elderly, Jews, Blacks, homosexuals, political opponents, etc.!  When will the next genocide begin?

Our founding fathers held to the biblical principle that human life is precious and created equal.  In the Declaration of Independence it is God the Creator who endowed every man, woman, and child with the right to “life, liberty, and the pursuit of happiness.”  The signers of the Constitution called these rights self evident truth.  Each life has inherent dignity and matchless value from conception until death.

Our Founders knew that if  God was ever  taken out of the national value system, our rights as citizens would no  longer be  absolute and would become subject to the relative values of those who are in a position to make or change the law.  In truth, we are no longer equal in value as people, and typically it is the weakest and most vulnerable members of society who are the first to pay the price.  Universal moral law gives way to the selfish pursuits of those who  demand the moral license to do what they want.

The dignity of human life is not just a biblical principle, it is a  principle of a decent life.  Every human being, born or unborn, deserves the equal protection of the law, and the value of life is not conditioned upon its usefulness to others or the state.

Neither scientific progress nor the desire to help others can justify the sacrifice of abortion, euthanasia, or any of the many new forms of biotechnology.  We must reaffirm our steadfast determination to defend the sanctity of human life.

“Our values must encompass the life of an unborn child. . .The law may call it a right, but no one ever called it good.  And in the quiet of conscience, people of both political parties know that more than a million abortions a year can’t be squared with the good heart of America. . .”   Mitt Romney

And I might add – nor are they squared with God.   God does not grade on a curve!

← AARP: Profit At The Expense Of The Elderly
Celebrate Constitution Day →