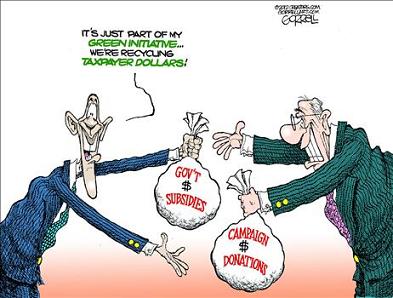 Obama has recklessly wielded the full power of the federal government to force the U.S. into using expensive, exotic and unproven “green” energy, costing taxpayers tens of billions of dollars. While enriching private investors, corporate insiders and executives of “green” energy companies, Obama has blocked access to enormous oil and gas reserves on federal land – which, by the way, taxpayers actually own.

Corporate insiders at the 15 publicly traded “green energy” companies that received federal stimulus subsidies sold their stock after taxpayer money poured in and before their companies’ values plummeted.

Obama gave more than $700 million in grants and guaranteed another $500 million in loans through his 2009 stimulus package.  The Obama “green” energy portfolio  has fallen by 78%, performing about 5 points worse than green energy companies that didn’t receive taxpayer funds.

Biofuel manufacturer Amyris, Inc. was given $24.3 million to turn plant sugar into diesel fuel, which pushed its stock to $30 a share.  Today, stock is less than $3, Amyris has closed two or its three plants and insiders netted $21 million in stock sales after the firm went public but before its shares plummeted.

Solazyme, another biofuel manufacturer got $21.8 million.  While its stock once traded at more than $25, today its worth less than $9.  Corporate insiders netted $18.4 million in capital gains before the stock crashed.

A123 Systems, the Massachusetts electric-car battery manufacturer got a $249 million grant and went belly-up last month.  When it first went pubic its stock was selling for $25 a share, today zilch.  Officers and directors made a profit of $11 million in stock sales before they closed the doors.

First Solar sold off much of its $3 billion in federal loan guarantees to third parties before it laid off 30% of its workers and  stocks dropped 90%.  Michael Aheam, the head of First Solar made more than $329 million in stock sales.

If this doesn’t underscore the fundamental problem with Obama’s “green” energy initiatives, I don’t know what would unless you consider the following as good examples.

The House Committee on Oversight and Government Reform suggests otherwise.   Emails shows that not only was Obama directing his “green” energy loan program but pressured officials to speed up the loan process and even intervened in some cases.

Why would Obama push loans and loan guarantees to companies that the government knew were not credit worthy, companies that had received junk credit ratings prior to the approval of government loans?  Could it be payback for supporting his 2008 campaign and his 2012 re-election campaign?

To paraphrase song writer Jerry Reed – Democratic Donors  got the gold mine – Taxpayers got the shaft.