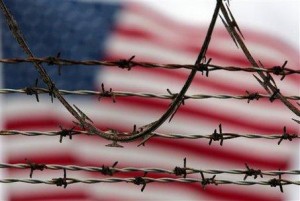 At the close of 2011, Barack Obama signed the National Defense Authorization Act for the year 2012.  In it are what some constitutional experts consider to be some of the greatest constitutional violations in American history.

At issue are sections 1021 and 1022 which, in essence, create a new power for the federal government to “indefinitely detain” – without due process – any person.   Indefinitely.  That’s little different than kidnapping.

States are fighting back.  Local communities in Colorado sent out the first warning shots, passing resolutions and ordinances rejecting such power earlier this year.  Michigan is considering a bill similar to a Virginia bill that  that Governor McDonnell signed this year   – House Bill 1160,   making Virginia the first State to pass a law, not only rejecting the federal act, but fully banning any State agency from cooperating with the feds.

Texas State Representative Lyle Larson introduced House Bill 149 (HB149), the Texas Liberty Preservation Act which could be the strongest anti-NDAA bill introduced yet stating that  “Sections 1021 and 1022 of the National Defense Authorization Act for Fiscal Year 2012 (Pub. L. No. 112-81) violate  portions of federal law, the United States Constitution, and the Texas Constitution and, as such, are invalid and illegal in this state,” and  like Virginia’s law,  requires State noncompliance with the federal law.  But Texas takes it a step further.  The Bill would make it a misdemeanor punishable by jail and/or a fine up to $10,000 for “any agent, official or employee of the U.S. or of a corporation providing services to the U.S. government to enforce or attempt to enforce a statute, rule or regulation, an order, or any law of the U.S. in violation of Texas law.”   You’ve just got to love Texas!

If you live in Texas, contact your state representative and senator, and encourage them to support HB149. You can find legislative contact information HERE.  Texans on Facebook (HERE) can also get involved in a grassroots organizing group.  This is essential for legislative success.

Sources close to the Tenth Amendment Center tell us to expect at least 10 other states considering the same.  And potentially dozens of counties and cities can be expected to move along these lines as well.

This is not a Republican or Democratic issue – every citizen in the U.S. should be outraged at government’s attempt to further expand the scope and power of the federal government to pick and choose who are terrorists and who they can “legally” place in concentration camps.   The NDAA has become an Orwellian milieu where liberty is secured by taking away our rights of American citizens.

Every State should be fighting back.    Contact your state representatives and demand they enact laws to nullify the NDAA.  Only if we stand together can we defeat these abuses.