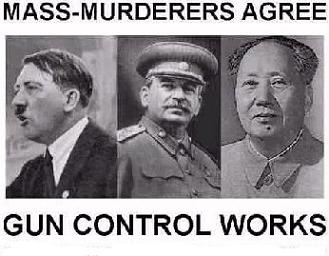 Are we at last brought to such a humiliating and debasing degradation, that we cannot be trusted with arms for our own defense?  Where is the difference between having our arms in our own possession and under our own direction, and having them under the management of Congress?  If our defense be the real object of having those arms, in whose hands can they be trusted with more propriety, or equal safety to us, as in our own hands?    Patrick Henry, June 9, 1788

The U.N. Small Arms Treaty is off the table until March 2013, at which time the U.N.  hopes to have it finalized and Obama and Hillary hope to have it ratified.   And that could be a possibility since the Senate is in control of the liberal Democrats.

The Small Arms Treaty is an extension of the Programme of Action (POA), The UN Protocol against the Illicit Manufacturing of and Trafficking in Firearms, Their Parts and Components and Ammunition (Firearms Protocol), which was adopted in 2001 by the GA with resolution 55/255 and entered into force on 3 June 2005. The Firearms Protocol constitutes, to date, the only global legally-binding instrument addressing the issue of small arms.

As clearly stated in Article 2,  “The purpose of this Protocol is to promote, facilitate and strengthen cooperation among States Parties in order to prevent, combat and eradicate the illicit manufacturing of and trafficking in firearms, their parts and components and ammunition.”  The Protocol provides for a series of control measures and normative provisions covering multiple aspects of the small arms issue.

The Protocol requires participating States to make  the illicit manufacture of and trafficking in firearms, as well as the tampering with markings on firearms  a criminal offense. It also  requires that States implement a series of control measures on firearms and ammunition.  Importantly, the Protocol requires mandatory marking not only at the time of manufacture, but also at the time of import to facilitate the identification and tracing of each firearm.  The Protocol calls for cooperation in the exchange of information  among  member states and  encourages states to seek support and cooperation amongst manufacturers, dealers, importers, exporters, brokers and commercial carriers of firearms. Finally, the Protocol calls for the regulation of arms brokering and the inclusion of information on brokers and brokering activities in exchanges of information between states.

The POA is technically not a treaty – it’ s a “mechanism” for “encouraging” voluntary cooperation.  The U.S. participates but has never signed or ratified the Protocol.  You can read the U.S.  August 2012 revised and updated  support statement here.

On August 27 through September 7, a review conference was held where delegates agreed to strengthen the program’s implementation,  record keeping and cooperation in tracing small arms and “light weapons,” and  the-not-quite finished  POA  International Small Arms Control Standards (ISACS) was formalized, requiring member states to maintain a centralized database of names, addresses and license numbers of all owners, as well as dates of ownership as long as the gun remains within the state jurisdiction.

The U.N. definition of light weapons –  weapons  designed for use by several persons serving as a crew  such as  heavy machine-guns, mortars, hand grenades, grenade launchers, portable anti-aircraft and anti-tank guns and portable missile launchers.

The standards the POA seeks to establish are still voluntary but in the future such controls could be incorporated into a legally binding international treaty.  Continued U.S. participation also plays to the well-worn anti-gun tactic of pointing to the gun controls established by other countries as an international “norm” that justifies or even requires the infringement on our 2nd Amendment.

The  U.N. gun control agenda has been pushed for years by the likes of the International Action Network on Small Arms (IANSA), Human Rights Watch, etc. appealing to our moral consciousness.  Then there is, of course, the  “fear factor.”  Did you know that between 1990 and 2001 “suggested” deaths at the hands of small arms is 4 million?    Small handguns are also “the de facto weapons of mass destruction of the last century and promises of the same in the next.”  You can read some background information and  propaganda at this link.

The IANSA is an umbrella network to which almost all national and regional gun control groups belong with financing from some of the most far-left foundations in the U.S. – Ford Foundation, Rockefeller Foundation, Ploughshares Foundation, the MacArthur Foundation and Christian Aid.

The U.N. gun control efforts are as much about preventing illicit trade as abortion is about healthcare.