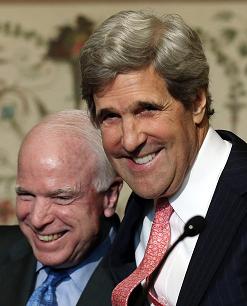 While  seemingly to joke, Senator John McCain recently  referred  to his good  buddy  John Kerry as the next  Secretary of State.  Has  Senator  McCain’s let us in on the secret to his disdain for  front-runner, U.N. Ambassador Susan Rice or are we just watching another chapter of bait and switch?

When the smoke clears will we see Sen. John Kerry as the next Secretary of State?  Hillary is in favor of Kerry but that could be simply because she holds a grudge against Rice who deserted her in the 2008 campaign to work for Obama’s election.

John Kerry, as I am sure everyone remembers from his presidential run in 2004, served in Vietnam but, it isn’t so much what he did in Nam as what he did when he returned to the United States, that puts his name in the “never” column for me.

When Kerry returned to the U.S. he joined in with the organizers of Vietnam Veterans Against the War  (VVAW) and developed close ties  to Hanoi Jane (Fonda) and Ramsey Clark, the radical Attorney General who served in the Johnson administration and Angela Davis,  the Communist professor at the University of California, Santa Cruz campus.

According to a November 1978 Heritage Foundation report, VVAW was “an overtly pro-Communist and pro-Hanoi organization that was eventually taken over by the Maoist Revolutionary Union”; it was “among the most active components of the Communist-dominated People’s Coalition for Peace and Justice”; and it included anti-war activists “who later progressed to involvement with such Maoist groups as the Venceremos  Organization and such avowedly terrorist operations as the Symbionese Liberation Army.”

Kerry was a prominent speaker at many rallies organized by the VVAW.  The Daily World, a Communist publication published photographs of Kerry addressing anti-war protesters, some of whom openly carried banners with portraits of Communist leader Angela Davis.  In 1981 the Herald Traveler said those present at these rallies carried an “abundance of Vietcong flags with clenched fists raised in the air  along with placards plainly bearing legends in support of China, Cuba, USSR, North Korea and the Hanoi government.”

From January 31 to February 2, 1971, VVAW  organized under John Kerry, the “Winter Soldier Investigation,” with Kerry and Fonda playing prominent roles. At this event, self-identified Vietnam veterans testified in condemnation of the American military’s alleged wholesale rape, torture, arson, and murder of South Vietnamese citizens. It was later learned that some participants in the testimony had lied, and that others were imposter’s who had never been in Vietnam.

On April 22, 1971,  John Kerry testified before the Senate Committee on Foreign Affairs as a spokesman for VVAW, giving his infamous characterization of American serviceman as murderers and pillagers “reminiscent of Genghis Khan.”  He claimed to have personally heard U.S. soldiers boast about having raped, dismembered, tortured, poisoned, and randomly executed innocent civilians, at times even razing entire villages in a manner reminiscent of Genghis Khan.   He testified that this was the norm and was carried out with the full blessings of officers at all levels of the American military command.

This was the primary reason why there was so much opposition to Kerry’s run for president in 2004 from Veterans of all wars.   The publication, the U.S. Veteran Dispatch, noted that “Kerry’s testimony occurred while some of his fellow Vietnam veterans were enduring terrible suffering as prisoners of war in North Vietnamese prisons.”    Even his now best bud McCain acknowledged that Kerry’s statements  were used by his captors to taunt him and his fellow prisoners.

The VVAW, under John Kerry’s leadership, mocked the uniform of American soldiers by wearing tattered fatigues marked with procommunist graffiti, marched in demonstrations under the flag of the Viet Cong and clearly lied about military actions in Vietnam.

Kerry began his career in the U.S. Senate in 1984 where he has established a record of support for far left wing causes.  During his Senate career, Kerry has voted for at least 7 major reductions in defense and military spending.  Even after the 1993 World Trade Center bombing Kerry voted to cut intelligence spending by $1.5 billion and again in 1995 when he voted again  to cut defense spending by $6.5 billion.

Over the years Kerry has voted against a Balanced Budget Amendment at least five times and against lowering government spending at least three times.  He voted for the Clinton tax hikes and against the Bush tax cuts.  As a matter of fact, Kerry’s lifetime Voting Rating from the leftist group Americans for Democratic Action, is 93%.  Kerry is also a big supported of the United Nations and has worked and supported Obama’s attempt  to push the global warming scam, including all those carbon taxes.

Kerry is married to Teresa Heinz who has used her vast fortune to fund numerous left wing causes.  Through her various foundations, Mrs. Heinz Kerry has given millions of dollars to a host of far-left groups, with a special focus on environmentalist causes. Key recipients of her funding include the Tides Foundation;  the Tides Center;  the Environmental Defense Fund;  Earth Action Network; Global Exchange; the National Resources Defense Council;  the Environmental Media Association;  the Brookings Institution;  the League of Conservation Voters Education Fund; the  Oxfam America; Physicians for Soscial Responsibility;  the NAACP Legal Defense and Education Fund;  the Mexican American Legal Defense and Education Fund;  the Feminist Majority Foundation; the  the Massachusetts Immigrant and Refugee Advocacy Coalition; the Sierra Club;  ACORN;  the National Urban League;  to name a few.

She  has also  held high-profile positions with several leftwing organizations. She was: (a) an Advisory Board member of the Earth Communications Office, which creates public-service campaigns to “educate and inspire”  people around the world to take action to protect the planet”; (b) a Board member of  Environmental Defense;  (c) a Board of Trustees member with the far left Brookings Institution;  and (d) a Board of Directors member with the Carnegie Corporation.

Can you imagine what John Kerry would be like as Secretary of State?   He is more liberal than Rice and, if even possible, a  few shades more socialist than Hillary.   Those few allies that we have left in the world must be having nightmares at the prospect of dealing with Kerry, while those Socialist/Communist/Islamic governments must be on the verge of orgasm.

Yes, to forgive is divine but to forget is stupid.  A leopard does not change his spots.