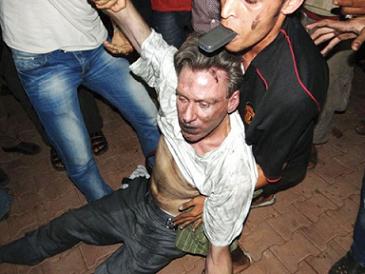 “We’re playing with fire, and to expect no consequences is ridiculous.  The path that Obama continues to take, without any objection from congress or others in the U.S., will lead us on a path to self destruction. Perhaps the ultimate question is whether it is by incompetence or by design.”

Thought you knew what was behind the  Benghazi attack?  Think again!   Doug Hagmann at Canada Free Press has completed  a three part series of articles  based on interviews with a government insider concerning the Benghazi attack that every American needs to read.

“The Obama administration is playing the role of Saudi Arabia’s private army. I think if Americans knew this, they would be outraged. Our service men and women are being sold out as mercenaries for the wants and desires of the Royal family, for the Saudi’s interests. It’s about religious dominance and oil. Who is really benefitting from, say, what’s going on in Egypt? Mubarek is out, and the Muslim Brotherhood is in. Who does that benefit? Saudi Arabia.”

You can read Part 1 at this link.

Part 11 provides information about the events of the attack and the continuation of the cover-up at the highest levels of our government.

Turkey is a NATO ally. They were assisting the Obama-Clinton-Saudi plan to funnel weapons ultimately to Syria, but the primary staging areas for these weapons were in Turkey near the Syrian border. Visual surveillance by Russia, using satellites and other means amassed photographic documentation of the U.S. assisting the ‘anti-Assad rebels’ inside Turkey. They developed evidence of the U.S. training these rebels and assisting them into Syria to fight against Assad.

Think about this. What if surveillance images observed anti-Assad rebels being trained to handle and mount chemical weapons – gas shells – onto rockets? The process would be apparent and would obviously be detected by a number of visual indicators. Obviously, Syria wanted this to stop. By extension, so did Russia.

One aspect of the weapons plan was to set up a false flag operation to make it appear that Assad used chemical weapons against his own people. Imagine the outcry from the civilized world to the news that Assad ‘gassed’ his own people. That would be an invitation to NATO and the West to openly intervene. Don’t forget about the timing of all of this. Two months before the elections, and time was running out. The job of taking out Assad was not yet complete. Such an event would quickly advance this agenda. By this time, however, being caught and placed in a rather unenviable position between Russia and the U.S., the Turkish consul general was in a ‘CYA, clean-up’ mode, assuring that none of the chemical weapons that might have still been in Libya were headed for Turkey.

You can read Part 11 at this link.

Eleven years after 9/11, we’re funding and assisting the very same terrorists who attacked our country to topple another country. And other countries are in this up to their necks as well. The Brits for one. The very country or empire that created some of the post-war borders, many knowingly unmanageable from the outset, is now in part responsible for changing them.

Stevens was lured to the CIA compound to talk about Russia’s knowledge of what the U.S. was doing – running weapons to be used against Assad in Syria, which is Russia’s “red line.” They needed to talk and not at the embassy, but at this out of the way location. The weapons running operation, although it was winding down anyway, was compromised. Over. Done. It is likely that the Turkish consul general told Sevens that the Russians had evidence – proof, of weapons in Turkey, including chemical weapons.

What is not widely known to Americans is that Obama sent Iranian born Valerie Jarrett to Qatar for high level talks with the Iranians about coming to an agreement before the November elections. This, despite Jarrett not having the capacity as official of the U.S. government. She had no business doing what she was doing. That aside, the plan was that Jarrett would broker a deal, and Obama would announce to the world that he had succeeded in diplomatic negotiations with the Iranians where they would halt their nuclear weapons ambitions and Obama would officially live up to his title as savior of the world.

The world is being set up for a false flag operation. Obama, Clinton and every supporter of the anti-Assad initiative are either lying to the American people or are “dupes.” The objective remains taking out Assad and replacing him with a Muslim Brotherhood-backed regime.

What coverup would be complete without hiding the identification and location of the survivors?

“This is so patently different than any other experience I’ve had. Unfortunately, people have been killed and maimed and in harm’s way in Afghanistan and Iraq and in points beyond. It’s typically been the case that they would release those names but in this case, they won’t. My challenge is to the media. You try and figure it out. They won’t let Congress know. They won’t seem to let the media know either.”

← 18th Annual Redistribution of Wealth Conference Is Over!
Agenda 21: The Trojan Horse →