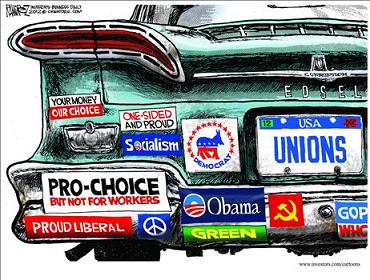 The Virginia General Assembly is not set to begin until  January 9 but already the wheels are starting to turn.

The Senate’s Privileges and Elections Committee recently passed a bill that calls for amending the state’s constitution to guarantee voter privacy in union elections.  Held over from the 2012 General Assembly session, the bill is expected to come to the Senate floor in the session that opens Jan. 9.

Sen. Bryce Reeves (R-Spotsylvania),  who introduced the bill said  the amendment is “essential if we are going to preserve voter integrity and privacy.  No citizen should be forced to reveal how they voted in any election, be it a federal, state, local or a union election.”

The bill is a response  to proposed federal legislation to allow workers to organize by getting their co-workers to sign pro-union cards, a method known as “card check,” instead of by holding secret-ballot elections.

The Employee Free Choice Act, aka “Card Check”, would take away numerous rights and protections currently afforded to workers employed at companies where unions are actively seeking to organize.  The bill, which is popular with unions, would remove workers’ rights to a federally supervised private ballot election. Instead, workers would be asked to sign cards in front of organizers and colleagues, potentially subjecting them to harassment or intimidation. Once a majority of employees have signed cards, the union is immediately recognized.

So far, the Democrats have not been successful in pushing  it through Congress, so there has been talk of  Obama going the administrative route through the National Labor Relations Board.

Another bill, proposed by Del. Richard P. Dickie Bell (R-Staunton), seeks to enshrine the state’s existing right-to-work law, which prevents employees from being required to pay union dues as a condition of employment, in the state Constitution.

Unions are, of course, opposed to both, arguing that Reeves’s bill will allow employers to stall the organizing process and intimidate workers who support creation of unions.  David Broder, the president of SEIU 512, which represents some Fairfax County employees and home health-care workers statewide, said he does not see a need for Virginia voters to make right to work part of  Virginia’s Constitution since Virginia is already a right to work state.

In order to amend the Virginia State Constitution, a bill must pass the House and Senate two separate years and then it can be presented to the voters for approval.