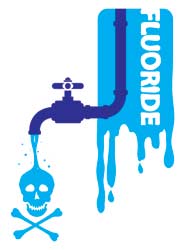 Did you know that the EPA classifies fluoride as a hazardous waste product?    It is so toxic it can’t legally be put in oceans, rivers or lakes, or added to soil – but it can be sold for  an additive to your community water supply!  Go Figure!

Fluoride compounds like fluorosilicic acid is a toxic industrial waste product which can also be contaminated with lead, arsenic, radionucleotides, aluminum and other industrial contaminants. During the Cold War, fluoride was responsible for more litigation against U.S. industry than all other air pollutants combined.  And while modern pollution control technology has resulted in significant reductions in fluoride emissions, millions of workers around the world remain at risk for respiratory, neurological, and bone diseases from fluoride exposure, and downwind communities remain at risk in countries with weak environmental regulation.”

The fluoride that is purchased by municipal waterworks and added to the pubic drinking water supply is not even a pharmaceutical grade fluoride.  It is fluorosilicic  acid, a discarded waste, a slurry of toxins not wanted by the phospate fertilizer mining corporations that sell to waterworks.  Communities use it because it is cheaper.  Some communities opt for  Sodium Fluorosilicate which is also a toxic waste product.  Repeated high exposure can cause deposits of Fluorides in the bones and teeth.  Other communities use Sodium Fluoride which is  commonly used as a rat poison despite warnings from ADA that young children risk a disease called dental fluorosis.

While they tell you it is good or your teeth, fluoride’s predominant action is topical – on the surface of your teeth – and not from inside your body.   Dental fluorosis is recognized by scientists world-wide as the first clinical  sign of fluoride poisoning. The Sky-rocketing increase in dental fluorosis rates is fluoridated communities clearly indicates that Fluoride ingestion is out of control.  The health problems caused by fluoride in other countries is well documented and staggering.

Current evidence strongly indicates that some people diagnosed with “arthritis” are in fact suffering from low-grade fluoride poisoning.  Joint pain and stiffness are well known symptoms of excessive fluoride intake. According to the U.S. Department of Health and Human Services, too much fluoride causes “chronic joint pain” and “arthritic symptoms.” (DHHS 1991). U.S. health authorities have long dismissed the relevance of this by insisting that fluoride only causes arthritic symptoms in patients with advanced forms of skeletal fluorosis, a bone disease caused by fluoride.

The kidneys help prevent the build-up of toxic fluoride levels in the body by excreting fluoride through the urine. When kidney function declines (due to age or disease), the risk of fluoride toxicity increases.  Individuals with advanced kidney disease are known to have a very high susceptibility  to fluoride toxicity since their bones and other tissues accumulate fluoride at levels far higher than healthy individuals.

According to the National Toxicology Program (NTP), “the preponderance of evidence” from laboratory studies indicates that fluoride is a mutagen, a compound that can cause genetic damage. A chemical that can cause genetic damage is one that can likely cause, or contribute to, the development of cancer.  The concern that fluoride can cause cancer has been fueled by evidence linking it to a serious form of bone cancer known as osteosarcoma. This evidence  includes a government animal study as well as several studies of human populations living in the United States.

While it is well known that fluoride accumulates in teeth and bones, fluoride has also been shown to concentrate in the cardiovascular system. This can result in increased blood pressure (hypertension), arterial calcification’s, arteriosclerosis, and myocardial damage. Electrocardiogram abnormalities have
also been observed in both humans and experimental animals chronically exposed to fluoride. Research has also found that patients with cardiac failure have significantly elevated levels of fluoride in their blood, even more than patients with kidney disease.

Fluoride has been shown to increase blood glucose levels and impair glucose tolerance, likely by inhibiting insulin production or secretion. Impaired  glucose tolerance, often a precursor to type 2 diabetes, has been found to occur in humans with fluoride intakes of only 0.07-0.4 mg/kg/day—a dose that can be reached in areas of “optimally” fluoridated water. Current fluoride intake, therefore, may contribute or exacerbate some types of diabetes. According to the National Research Council (2006), “any role of fluoride exposure in the development of impaired glucose metabolism or diabetes is potentially significant.”

In 2006, the National Research Council (NRC) stated that “it is apparent that fluorides have the ability to interfere with the functions of the brain.” In addition to calling for U.S.-based research on fluoride’s IQ effects, the NRC expressed concern about fluoride’s possible contribution to dementia.

Research on fluoride also has implicated it in changing the structure of the  brains of fetuses, negatively impacting the behavioral/neurological assessment  scores of newborns and, in animal studies, impairing memory.   This information is very important, from a psychiatric standpoint, because we  have witnessed rising rates of attention deficit disorder, major depression,  dementia and many other psychiatric illnesses since the 1940s, and because the  United States (which fluoridates a much higher percentage of its drinking water  than most countries, including European nations) has some of the highest rates  of mental disorders in the world–by a wide margin.

In addition, it has also been linked to Endocrine Disruption, Thyroid Disease, Hypersensitivity, Gastrointestinal problems and bone fractures.

In 2011, the EPA reversed course and lowered the recommended maximum amount of  fluoride in drinking water due to data that the levels then being allowed put  kids at risk of dental fluorosis–streaking and pitting of teeth due to  excessive fluoride, which also puts tooth enamel at risk.

Besides your toothpaste and drinking water, If you’re still eating conventionally-farmed food products, you may be  unknowingly exposing yourself to extreme levels of fluoride.

Products sprayed with Cryolite, a presticide that is very effective at killing bugs, are actually being sprayed with sodium aluminum fluoride.   Iceberg lettuce can now be laced with a startling 180 parts per million  (ppm) of fluoride – 180 times higher than the ‘recommended’ water fluoridation  level.   Citrus fruits are actually allowed to contain 95 ppm’s of sodium fluoride; potatoes can have as much as 22 ppm’s on the outside and 2 ppm’s inside; and raisins are allowed 55 ppm’s.

Non-organic poultry products, especially mechanically de-boned chicken such as chicken nuggets, ground chicken, chicken hot dogs, etc.; also, chicken soup made from bones (fluoride from pesticides on feed accumulates in bones, fat, and skin); sardines, canned salmon, etc. where bones are eaten along with the rest of the fish; cereal, when made from fluoridated water during the extrusion process; fluoride-based pesticides accumulate in tea leaves; wine (from cryolite pesticide sprayed on grape crops in California); soft drinks, beer,  and fruit juices from pesticides or fluoridated water added to the product  all add to your fluoride exposure.

As of February 2015 there were 43 studies associating fluoride expose with reduced IQ in children.  In July of 2015, a team of from Harvard and China published a study warning of potential damage to human intelligence.

Yet, despite all the studies, U.S. fluoridation proponents have continued their “full speed ahead” approach of forcing every individual, including toddlers and children, to ingest fluoride through public tap water and all of the processed foods and beverages made with it .