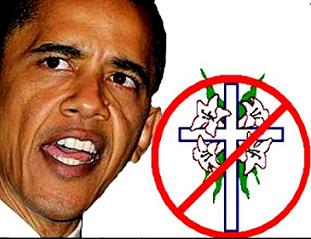 In a legal argument formally presented in federal court in the case of Hobby Lobby v. Kathleen Sebelius, the Obama administration is claiming that the First Amendment—which expressly denies the government the authority to prohibit the “free exercise” of religion—nonetheless allows it to force Christians to directly violate their religious beliefs even on a matter that involves the life and death of innocent human beings.

The Obama administration is making a two-fold argument for why it can force Christians to act against their faith in complying with the regulation it has issued under the Obamacare law that requires virtually all health care plans to cover, without co-pay, sterilizations, contraceptives, and abortion-inducing drugs.

Americans lose their First Amendment right to freely exercise their religion when they form a corporation and engage in commerce.  A person’s Christianity, the administration argues, cannot be carried out through activities he engages in through an incorporated business.    A secular employer, is not entitled to the protections of the Free Exercise Clause or RFRA [the Religious Freedom Restoration Act],”  according to a federal attorney.  “This is because, although the First Amendment freedoms of speech and association are ‘right[s] enjoyed by religious and secular groups alike,’ the Free Exercise Clause ‘gives special solicitude to the rights of religious organizations.’”

For those not familiar with the First Amendment:  “Congress shall make no law respecting an establishment of religion, or prohibiting the free exercise thereof; or abridging the freedom of speech, or of the press, etc.”

The Obama  administration had that covered in their second argument –  government  can force a person to act against his religion so long as the coercion is done under the authority of a law that is neutral and generally applicable—in other words, as long as the law was not written specifically to persecute Christians as Christians, the government can use that law to persecute Christians.

That argument has broad ramifications.  Suppose the government passes a law that says everyone in America must eat pork?  How about a law that says no woman can wear scarves to cover their heads?

As the nation approaches the much publicized fiscal cliff, it also approaches a moral cliff: Will the Obama administration compel Christians to act against their faith? As of now, the answer seems plain: Starting Tuesday, it will.

← Our Food – Our Future
Kerry, The New Socialist Secretary of State? →