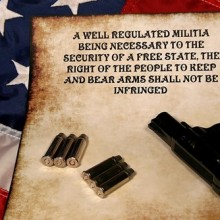 “Those who hammer their guns into plowshares will plow for those who do not.”   Thomas Jefferson

Senator Dianne Feinstein’s new so-called “Assault Weapons” Ban, if passed, will spell the end of our 2nd Amendment rights.  Don’t be fooled by the liberals in Congress or the liberals in the lap dog press.  This is not about saving children or saving lives in  – it is an outright gun grab.

Ban the sale, transfer, importation and manufacturing of ALL firearms with a detachable magazine and at least one “military characteristic” which includes just about anything that makes a gun “look scary.”

Bans the sale, transfer, importation, and manufacturing of magazines holding more than 10 rounds;

Force owners of ALL “grandfathered” weapons to undergo an intrusive background check and unnecessary fingerprinting;

Force owners of ALL “grandfathered” weapons to federally register their guns after obtaining permission slip from local law enforcement showing their guns are not in violation of state or local law. That’s right. If you own a $10 magazine that’s more than 10 rounds, you’ll have to register it with the BATFE in their National Firearms Registry.

If Barack Obama and his gaggle of gun grabbers have their way, the American citizenry will have all of their firearms taken away.   If their current attempt to outlaw guns  is successful,  do you really think it will end there?   Don’t be so naive!   The goal of people like Barack Obama, Dianne Feinstein, Nancy Pelosi, Harry Reid and the balance of the far left loonies  has always been total gun confiscation.

It’s no coincidence that the communist Chinese, the biggest holders of U.S. debt, have demanded the American people be disarmed.

History tells us that it is the instinct of all tyrants to disarm the slaves.    Our Founding Fathers did not give us the 2nd Amendment so that we would be free to hunt.   The reason why the 2nd amendment exists is to arm the population in order to  overthrow a tyrannical government, whether it be our own or China!

Our American government was formed with  the sole purpose of defending and protecting  individual inalienable  rights.  Among civil societies this concept of safeguarding individual  inalienable rights as the purpose of government is solely unique to our nation.   The Second Amendment is one of those inalienable rights the Founding Fathers  demanded be  embodied within  the  Constitution;  a Constitution our elected officials  take an oath to protect and defend.

“A militia, when properly formed, are in fact the people themselves . . .”  Richard Henry Lee in Letters from the Federal Farmer to the Republic, May, 1788

The people are not to be disarmed of their weapons. They are left in full  possession of them.”  Zachariah Johnson, Elliot’s Debates, vol 3 “The Debates in the Several State Conventions on the Adoption of the Federal Constitution.”

“And that the said Constitution be never construed to authorize Congress to infringe the just liberty of the Press, or the rights of Conscience; or to prevent the people of the United States, who are peaceable citizens, from keeping their own arms; …” Samuel Adams quoted in the Philadelphia Independent Gazetteer, August 20, 1789, “Propositions submitted to the Convention of this State”

“Firearms stand next in importance to the constitution itself. They are the American people’s liberty teeth and keystone under independence … from the hour
the Pilgrims landed to the present day, events, occurrences and tendencies prove that to ensure peace security and happiness, the rifle and pistol are equally
indispensable … the very atmosphere of firearms anywhere restrains evil interference — they deserve a place of honor with all that’s good.”  George
Washington, First President of the United States.

The supposed quietude of a good man allures the ruffian; while on the other hand arms, like laws, discourage and keep the invader and plunderer in awe, and
preserve order in the world as property. The same balance would be preserved were all the world destitute of arms, for all would be alike; but since some
will not, others dare not lay them aside … Horrid mischief would ensue were the law-abiding deprived of the use of them.” Thomas Paine

“The great object is that every man be armed.” and “Everyone who is able may have a gun.” Patrick Henry

“Are we at last brought to such humiliating and debasing degradation, that we cannot be trusted with arms for our defense? Where is the difference between having our arms in possession and under our direction and having them under the management of Congress? If our defense be the real object of having those arms, in whose hands can they be trusted with more propriety, or equal safety to us, as in our own hands?” Patrick Henry

The constitutions of most of our States assert that all power is inherent in the people; that … it is their right and duty to be at all times armed; … ”  Thomas Jefferson, letter to Justice John Cartwright, June 5, 1824.

← Incandescents or Hazmat: There’s No Longer Much Choice
Islamic Compounds Here in America Training for Jihad →