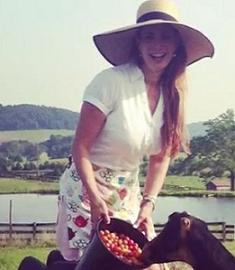 Last summer,  Martha Boneta, owner of Liberty Farms in the northern village of Paris,  Fauquier County, Virginia, was  threatened with nearly $5,000 in fines for selling produce and crafts and  throwing unlicensed events, including a birthday party for her best friend’s  child.   “It’s rather odd that I’m the only farmer in the county having these issues,” Boneta said. “It’s customary to do these things. It’s done through on farms  throughout Virginia to help farming and agriculture.”

Boneta was told that she did not have the proper event permits for the party  and other events, including wine tastings, craft workshops, and pumpkin  carving.  “Why I would need a permit for a pumpkin carving?” she asked.

Boneta was also threatened with fines for selling produce and products not grown  or made on the 70-acre farm in a small store she operated on the property. But  she said she already had a special license issued to her in 2011 that allowed  her to run a “retail farm shop” where at the time, she made it clear that she  intended to sell handspun yarns and craft items like birdhouses in addition to  fresh vegetables, eggs, and herbs.

But license be damned since,  one month after issuing Boneta a license,  the Fauquier County Board of Supervisors changed “farm  sales” classification to require a special permit for activities that were  previous including under the license.

This was not the first obstacle Boneta had run into.  She  purchased a ruined and abandoned farm under an agricultural conservation easement. Nothing in the bill of sale was mentioned that she could not farm. A lot of hard work, sweat, and tears went into breathing life into this property. She never dreamed that stumbling blocks would be placed in front of her along the way by the very Americans who are supposed to protect our freedoms.

She got a business license. She built an apiary, harvested hay, grew herbs, and rescued 165 animals, sold chicken, duck, turkey, emu eggs, candles made from beeswax, birdhouses, and fiber from llamas and alpacas.

First, she was told she could not cut grass on her property. Then she had to fence in 20 acres for two years because it was considered “hallowed ground,” although nobody died there during the Civil War, it was just an encampment area. By this rule, the whole state of Virginia should be cordoned off to any kind of use due to its many battlefields and movements of troops across the state. After two years, a “clerical error” was declared and Martha could use her land; no reimbursement for loss of property or revenue.

A trench was dug to prevent parking on her property because it might obscure the view shed. Then came the infamous pumpkin carving party that actually never took place, it was cancelled. Yet the harassment from the county and the moneyed environmentalists never stopped.  These people prefer and define farming as penny-loafer farming, running a few horses on lush endless green grass fields, nothing to grow that people would need.

But this is not just about Martha Boneta – it is about abuse and intrusion on private property rights.  Boneta  filed suit against the county and its zoning administrator Kim Johnson alleging  that the county violated Virginia’s Right to Farm Act, among other  things.

The Virginia Right to Farm Act prohibits local authorities from treating agricultural activity as a “nuisance” — which seems to be what’s happening all across the state.

Virginia State Delegate Scott Lingamfelter, who happens to be running for Lt. Governor, announced that he has prepared the “Boneta Bill” to amend the Right to Farm Act.   “House  Bill 1430 will ensure that no government official, elected or appointed, will  restrict the right to property that our Founding Fathers, many of whom were  Virginia farmers, held as inherent and sacred. The Boneta Bill adds teeth to the  Virginia Right to Farm Act to protect property rights and individual  liberties.”

Local Governments for Sustainability, formerly known as ICLEI, the International Council on Local Environmental Initiatives has been quite successful since 1992, when U.N. Agenda 21 was adopted, in infiltrating and recruiting local governments to do their bidding. When Americans exposed their nefarious plans, they  changed their name. Their main goal is to control zoning and land use.

Americans are waking up when they run into legal battles at the state and local levels involving zoning issues driven by one ultimate goal, global governance. The U.N. Agenda 21 “soft law” document is not legally binding per se but morally obligatory. Unfortunately, so many of its 40 chapters of rules have already been written into law within other laws passed by Congress and they provide specific rules and regulations about local organizations and their practices, limiting everyone’s behavior and freedom, individuals and organizations alike.   Add zoning ordinances passed by local and state governments and you have a recipe for disaster, total control of what you do with your own property.