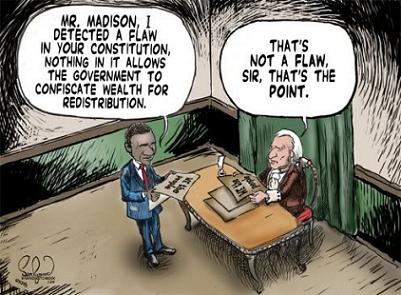 The power to tax is the most ubiquitous of all government powers  –   It reaches directly or indirectly into the purse of every citizen.  While it is a necesssary evil, that evil should not be abused.   Congress has a moral obligation to adhere to sound constitutional and economic principles when levying taxes just as citizens have an ethical and moral obligation to hold Congress accountable for violations of these principles.

In the above listed Supreme Court case, the court said “It must be conceded that there are such [private] rights  in every free government beyond the control of the State.  A government which recognized no such rights, which held the lives, the liberty, and the property of its citizens subject at all times to the absolute disposition and unlimited control of even the most democratic depository of power, is after all but a despotism.”

In 1926 the Supreme Court, in its  decision in Connally v. General Construction, recognized a fundamental right to know what legislation means, especially legislation that creates an affirmative duty to act.  “A statute which either forbids or requires the doing of an act in terms so vague that men of common intelligence must necessarily guess at its meaning and differ as to its application, violates the first essential of due process of law.”  269 U.S. 385 (1926)

Our current tax structure  is in direct conflict with the Court’s standard for understandable legislation.  The tax code is so complex that no one absolutely understands is, including the IRS.  But who has time to read and understand 72,536 pages of tax code?   Not only is it difficult to understand, it is  impossible to obey.

In 2001, the Treasury Inspector General for Tax Administration reported that IRS personnel, in its taxpayer assistance centers, answered taxpayers’ questions “inaccurately or incompletely” up to 73% of the time.  I can personally vouch for that.  Having a question about deductible medical supplies I made the mistake of calling the IRS tax assistance center where I got to speak to three different people who gave me three different answers.  Not satisfied, I spoke to a Tax attorney who gave me another answer which included the possibility of hiring him if and when I was challenged by the IRS.

Businesses and individuals spend about 7.6 billion hours meeting just the tax code’s filing requirements in 2006, according to the National Taxpayer Advocate.  That is equivalent to 3.8 million full time workers.  And, these numbers do not include the amount of time and energy taxpayers must spend each year dealing with IRS harassment.  In 2009 alone, more than 40 million taxpayers faced IRS collection actions which resulted in 581 property seizures, $965,618 in tax liens, and penalty assessments of $36,228,339.00.

According to the National Taxpayer Advocate, the cost in 2008 to comply with the monstrous tax code cost taxpayers and businesses an estimated out-of-pocket cost of approximately $193 million annually.  And that doesn’t include the cost of responding to the tens of millions of annual notices and letters challenging penalty assessments, millions of annual audits and appeals, tax litigation and enforced collection, economic disincentive costs, and the cost of tax evasion and avoidance.   When you add in these factors, for every dollar paid to the IRS, it costs taxpayers and businesses .65 cents to get it there.

What you don’t know won’t hurt you has become the government’s motto.   The  tax code hides the true cost of government behind a chronic deficit and a maddening multiplicity of taxes.  Politicians increase taxes all the time without taxpayers ever seeing it.  They are hidden in the cost of everything we buy, own, sell or use.

One of the biggest perceived problems affecting the “me” generation is that taxes are not fair.  They’re right but not for the reason they raise. Taxpayers with the same income, family situations and other key characteristics often face different tax burdens. –  taxpayers in states with high state and local income and property taxes receive higher deductions than taxpayers who live in lower tax states with fewer state provided services.  Social Security benefits are taxed at a higher rate for married seniors than for those not married.  How much you pay in sometimes dependent on where you live, the choices made by your employer and whether or not you are married.

And, as  more and more people are removed from the tax rolls through credits, deductions, exemption, etc, the burden on the remaining taxpayers grows heavier.  Tax rates, out of necessity, must rise to accommodate an ever increasing government growth, control and power.

Our guiding principle of jurisprudence is that all men stand equal before the law.  But this guiding principle is undermined by a tax code with its quagmire of arbitrary rules.    While such discrimination is unacceptable in other areas of the law, in tax law, not only is it acceptable and tolerated – it is embraced.

The unfairness of income taxes is why the founders generally rejected such tax schemes in favor of excise taxes on consumption.  Since the 30s, Congress has used its power to tax to implement social programs and redistribution of wealth.  One way this is done is through refundable tax credits which simply means that even if you owe no taxes, you can get cash from the government.  Refundable tax credits are nothing more than welfare programs.

Article I, Section 8 of the Constitution authorizes the federal government to collect taxes to:

The founders were adamant that the taxing authority granted in the Constitution be used only to benefit the nation as a whole – not individual classes of citizens at the expense of others.  And yet, a large portion of the budgets of governments at all levels uses taxation as a means to redistribution wealth from one segment of the population to another.

In 1933, United States v. Butler, the Supreme Court was asked to address the government’s claim that redistribution was justifiable under the “general welfare” clause of the Constitution. The court ruled that “a tax” in the general understanding of the term, and as used in the Constitution, signifies an exaction for the support of the government.  The word has never been thought to connote the expropriation of money from one group for the benefit of another.” 297 U.S. 1, 61 (1933).

Thomas Jefferson wrote that to “take from one, because it is thought his own industry and that of his father has acquired too much, in order to spare to others who have not exercised equal industry and skill, is to violate arbitrarily the first principle of association, the guarantee to everyone a free exercise of his industry and the fruits acquired by it.”

There is no legal or moral authority that justifies the government to take from some and give to others who have not earned it.   Frederick Bastiat, a French economists, called this practice “legal plunder.”

As long as the government is allowed to continue this unconstitutional plunder, there will never be enough money to satisfy the thieves in Washington.