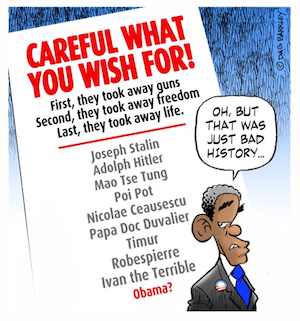 The sales were perfectly legal under Virginia law, which does not require background checks on gun sales between private individuals, or on any ammunition sales.

However, Ebbin and Hope, riding the Obama bandwagon,  think the law should be changed to close the so-called gun show loophole, claiming the video
demonstrates that it’s too easy to buy weapons in Virginia.    “Sadly, nearly 40% of all gun sales are conducted without a background check.  In the interest of community safety, it’s not too much to ask for responsible gun purchasers to undergo a background check to screen for criminal history or history of serious mental illness.”

Philip Van Cleave, who heads the Virginia Citizens Defense League, said the video shows nothing shocking.  “It makes me think I should make a video of myself buying bubble gum,” he said. “I would say this is the way America is supposed to be. The Second Amendment guarantees our right to bear arms. And the fact that it’s easy to purchase ammunition and arms is good.”

Democratic Del. Joseph Morrissey said Wednesday he will  introduce a bill to ban the sale of assault-style weapons and large capacity  magazines.   A federal assault weapons ban expired in 2004, but several states  have laws prohibiting them.

Democrat Delegate  Patrick Hope,  has introduced HB 2025 that says no individual can legally sell his or her firearm to another Virginia resident without first obtaining a criminal background check through a licensed firearms dealer.

Democratic Delegate  Kaye Kory introduced H1693  that removes the specific exception for  a person to  possesses an unloaded firearm that is  in a closed container,  an unloaded shotgun or rifle in a firearms rack or a knife having a metal blade of  three inches or longer, in their vehicle  located at any public school in Virginia., making it a Class 6 felony.

Democratic State Senator  Dave Marsden says he will introduce legislation to penalize gun owners who  do not report the theft of their weapon or whose guns are used in a crime if  they didn’t take steps to prevent it.

The only sensible legislation  introduced concerning firearms, so far, was introduced by Republican Del. Bob Marshall .  Marshall’s bill – HB 1557  would allow for designated individuals to carry concealed handguns on school property.    “When you’re in trouble, why do you call 911?  You want someone with a gun to  defend you,” Marshall told ABC7.  “I’ve got grandkids in public school in  Virginia.  I want someone there to defend them before the damage is done.  We basically have gun free zones which are magnets for malicious and deranged  individuals.”

Governor Bob McDonnel said that  “If people were armed, not just police officers, but school officials, there would be opportunities to stop aggressors from coming  into the school  I think that is a reasonable discussion to be had.”

Clearly, the liberal progressive advocates of gun control are using the Sandy Hook tragedy to challenge the U.S. Constitution’s Second Amendment by nefarious methods, hoping the public will not notice how their freedom to own guns  is being eroded.   If the progressives are successful, we will eventually be at the mercy of the criminals and the government.