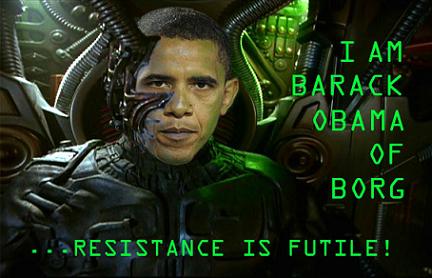 Godfather politics,  The Heritage blog and Gary North  had the best commentaries on Obama’s second inaugural speech.  I’ve incorporated all three and added a few of my choice translations.

While mainstream media commentators are going on about him sounding like  Lincoln, everything I heard coming out of Obama’s mouth sounded like a  conquering Hun come to plunder the last city in the West.

The line that to me best represents Obama’s mindset was, “Fidelity to our  founding principles requires new responses to new challenges, that preserving  our individual freedoms ultimately requires collective action.”

Translated: We honor our founding principles by discarding them;  individuals only exist for the  community.  I do not intend to let something as trivial as the Constitution stand in my way.

The drift of the overall speech, against the context of decades of  liberalism, makes it clear that the president means to shred what’s left of the  Constitution he is sworn to protect. Gun control, more outrageous spending,  climate change, gay marriage, “fairness” — it was a grocery list of liberal hors  d’oeuvres for the Left to gorge upon before the main meal is made out of the  carcass of our country.

Stalin, Mao, Hitler, Castro — choose your comparison. Obama made it clear  that he will brook no opposition to his agenda, as if the past four years hadn’t  made the point for him.

In a speech that leaned heavily on past presidents who would be appalled at  his plans, Obama  might as well have come out and just quoted Stalin  directly while declaring himself to be Abraham Lincoln reincarnated.

It was the death of reason, the end of individual freedom. The hive won, and  the inauguration spectacle was the declaration of what’s to come.  When the president of the United States is throwing around words like “collective,” you can be sure the enemy thinks it’s over. “We are Borg.  Resistance is futile.”

We heard other interesting tidbits of our future when Obama said that  “the American people can no more meet the demands of today’s world by acting alone than American soldiers could have met the forces of fascism or communism with muskets and militias. No single person can train all the math and science teachers we’ll need to equip our children for the future. . .”

Translation:   In case you didn’t hear me the first time,  you didn’t build that and we will  continue with the dumbing down of your children until they follow us blindly into our new socialist utopia.

Translation:   I will continue to push for more tax increases instead of reforming Medicare and Social Security, because Obamacare will kill off the old and lame in the near future.

Then Obama added that “We will respond to the threat of climate change, knowing that the failure to do so would betray our children and future generations. Some may still deny the overwhelming judgment of science, but none can avoid the devastating impact of raging fires, and crippling drought, and more powerful storms.”

Translation:  I will continue to increase regulations on the energy sources we use and throw taxpayer money into “green” energy companies irregardless of the fact that climate change has been shown to be a complete fraud because the “peasants” are too stupid to discern between real climate change and the weather.

Gary North  had the best description of  Obama’s speech when he called it  “a judicious combination of platitudes, deception, code words, and a large dose of bloviation at the end.”

What progressives are  not counting on  is the number of Americans who don’t buy into that belief, who understand the principles this country was founded  upon are stronger than any Marxist pablum. The resistance is just beginning.

“Tyrants preserve themselves by sowing fear and mistrust among the citizens by means of spies, by distracting them with foreign wars, by eliminating men of spirit who might lead a revolution, by humbling the people, and making them incapable of decisive action.”   Aristotle

← Allowing A World Without America
Benghazi and Hillary →