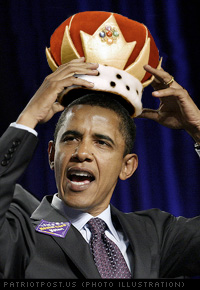 The Washington Post reported on Friday the 25th that a federal  appeals court overturned President  Obama’s   controversial  recess appointments from last year, ruling he abused his powers  and  acted when the Senate  was not actually in a  recess.

The three-judge panel’s ruling is a major blow to Obama.   The judges  ruled that the appointments he made to the National Labor Relations Board (NLRB)  are illegal, and hence the five member board did not have a quorum  to operate.

Even though Obama’s attorneys argued that  the Senate was convening every three days  at the time Obama made the “recess” appointments,    the pro forma sessions didn’t allow any business, and nearly every Senator was absent from the chamber, signaling to Obama that the Senate wasn’t able to perform its confirmation duties and therefore they should be considered essentially in recess.  Unfortunately that didn’t cut-it with the court.

The  judges ruled  that the president’s recess appointment powers don’t apply to “intra-session” appointments — those made when Congress  has  left town for a few days or weeks and Obama had erred  when he  said he could claim the power to determine when he  could make  appointments.

The Constitution reads: “The president shall have power to fill up all vacancies  that may happen during the recess of the  Senate,   by granting commissions which shall expire at the end of their next session.”

The problem for past and present presidents  is the word “recess.”   In legislative-speak it can have several meanings such as a short break during the day, or a break of days or weeks for holidays or the end of the yearly session.   Obama used the ill defined legislative-speak with his own distorted view of his presidential powers  to by-pass the Senate to appoint his radical union sympathizers to the National Relations Board.

The Court said that by “Allowing the president to define the scope of his own appointments  power  would eviscerate the Constitution’s separation of powers. . .  the recess power was created for a time when Congress  met only a few months out of the year, and was designed for the  president to  fill vacancies during the long periods when Congress was  not in session.   In modern times, when Congress  is almost always capable of  meeting, the  recess powers should be more circumscribed.”    Presidential powers should only apply after congress has adjourned a session permanently, which in this day and age is at the end of the year.

If the ruling withstands Supreme Court scrutiny, it would dramatically constrain not only Obama’s abuses of the Constitution but future presidents as well.

The ruling invalidates one NLRB  decision and over  the  longer term it could invalidate a year’s worth of decisions by the  agency, as well as invalidate the new Consumer Financial Protection Bureau.    It  could  even call  into question decisions made by some judges who were given recess   appointments.

Noel Franciso, who argued the case for the U.S. Chamber of Commerce and the company that challenged the NLRB appoints said  the  court’s decision had  had  returned  to the Constitution’s intent, which was to make the recess  appointment an  emergency power for use only when Congress  was  not  available and warned that if Obama’s stance  prevailed, then  presidents could ultimately make appointments when the  Senate  takes its midday  recess for weekly party caucus lunches.

“Issues like this — it’s not about protecting  Congress  from the  president and the president from  Congress. The  Constitution draws these lines ultimately to limit the  government to  protect the people.”

Michael A. Carrier, a  professor at Rutgers University School of Law,  said the appeals court panel’s understanding of the Constitution is  probably what the Founding Fathers had in mind.

“At the time that the framers drafted the clause, the Senate   was a very different place. They would meet for a few months and disband for the  rest of the year — six to nine months.  And so you really did need the recess  appointments clause.”

John Isaacson, director of www.presidential-appointments.org,  stated  that  presidents use their  powers to do an end run around the  Senate. “Most of the time, it was not because the Senate  was out of business, but because the Senate  wouldn’t confirm.  The whole business since the Second World  War is related to the contentiousness between the different parts of the federal government.”

In their ruling the judges said their duty is not to speed up the  workings  of government, but to hold to constitutional principles.  Whatever the Supreme Court  decides, the  case leaves Mr. Obama with a major constitutional question as he begins his  second term.

Senator  Mike Johanns (R-Neb.) posted a press release to his website Friday night saying he had sent letters to three appointees — Deputy Labor Secretary Sharon Block, union lawyer Richard Griffin of the National Labor Relations Board, and Richard Cordray, director of the Consumer Financial Protection Bureau — stating that “in light of today’s opinion by the U.S. Court of Appeals for the D.C. Circuit… it is appropriate that you resign effective immediately.”

“Any action taken by the NLRB in the last year should be invalidated,” since the Board would technically have been operating below quorum had Block, Griffin and Flynn’s appointments not been pushed through.

Johann is also asking for a  GAO investigation into the actions of recess-appointed officials to determine what rulings and actions now need to be invalidated.

Sen. Bob Corker (R-Tenn.) said on Sunday that the  court ruling “could well” invalidate a year’s worth of actions made by President Obama’s appointees to the National Labor Relations Board (NLRB) and the Consumer Financial Protection Bureau (CFPB). …  “In each case someone might have to challenge those rulings to make them invalid, but certainly that’s what we said at the time – these people were going to be working in vain and the rulings that they come forth with were going to be challenged. That’s turned out to be the case.”