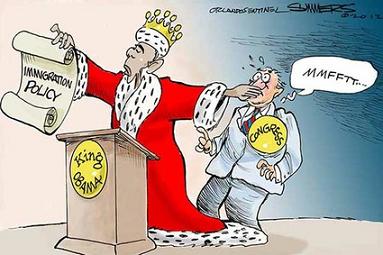 Amnesty has reared its ugly head again.    We are told that we must allow those who knowingly broke American immigration laws to become U.S. citizens because they deserve it!    Criminals usually deserve imprisonment or at least deportation but thanks to Obama’s policies in overruling American law, illegal aliens have not only been given the green light to “come on in” and enjoy America’s welfare state but now,  democrats  want to further reward them for their criminal actions.

The current chief of the union that represents Immigration and Customs  Enforcement agents, will testify before the  House Judiciary Committee  that ICE agents are  now required to wait until most illegal immigrants have three misdemeanor  convictions before they can be arrested and put in deportation proceedings.

Chris Crane, president of the National Immigration and Customs Enforcement Council said that “Most Americans would be surprised to know that immigration agents are  regularly prohibited from enforcing the two most fundamental sections of United  States immigration law.” According to ICE policy, in most cases, immigration agents can no  longer arrest persons solely for entering the United States illegally.”

Julie Myers Woods, former ICE Director in the  Bush administration will testify   before the House immigration hearings that President Obama’s new  nondeportation policies would have let the Sept. 11 hijackers remain in the  country even if they had been picked up in the months before their deadly  attacks.   “It sends a message to those that seek to cause harm: if they can come in the  United States illegally, but not immediately commit any additional crimes, they  are likely to be left alone. Left alone to plan, take steps, cause harm,” she  said.  Obama’s amnesty plan ” would have overlooked “individuals like several of the 9/11 hijackers,  who ‘merely’ lied to obtain state identification documents or on their visa  applications.”

As to the impact such an amnesty program would have on the nation’s southern border, this is not a theoretical question. We’ve been down this road before. Back in 2005, Judicial Watch uncovered a Border Patrol survey conducted by the Bush administration in 2004 to determine what impact amnesty would have on illegal immigration.

Even the rumor of Bush’s amnesty program led to a sharp spike in illegal immigration. Here are some of the particulars:

No wonder the Bush administration aborted the survey before its completion and ordered government officials not to talk about it: “Do not talk about amnesty, increase in apprehensions, or give comparisons of past immigration reform proposals.

Official estimates indicate there are 11-12 million illegal aliens in the country that will benefit from amnesty.   Add in chain migration (you bring your extended family over) and the inevitable “guest” worker program that will be part of this devil’s bargain, and we’re talking at least 40 million low-skilled, poor, under-educated new immigrants who will be supported by American taxpayers.

Obama’s amnesty push  will initially cost the American taxpayer an estimated $585 million.   It will  add nearly 2 million workers – possibly more – to the U.S. job market.  This is a negligent economic and social policy with  8% unemployment and half of recent young college graduates unemployed or underemployed.

Once these illegal aliens  become permanent legal residents, the floodgates open.  Medicare, Social Security, food stamps, education, not to mention the earned income tax credit that would cost tens of billions annually and will  also encourage even more illegal immigration when others figure out how to work the system.

The majority of the American people see their own families struggling while Obama and his ilk are pushing for law breakers to reap the benefits not available to them.

What about the millions of  hopeful immigrants who have  applied for citizenship the right way?  How do they feel when they have been pushed to the back of the line because of this irresponsible act?  And as for the Hispanic and Black Americans, do you think they are happy knowing that Obama’s job killing policies have hurt their communities?

The unemployment rate for Hispanics is 3 percent higher than the national average hovering around 11 percent.  In the Black community the unemployment rate for Black youth is a staggering 40.5% as of March 2012. This new policy will not only take jobs away from them, but also from the millions of other Americans hoping to find work in a diminished economy.

It is wrong to reward illegal conduct.  If more immigrants are needed  they should come from those waiting in line or willing to join the existing line to become legal residents and hopefully future citizens of this great nation.

← Will The Scouts Cave To Homosexual Activists?
Government seeks to control the people →