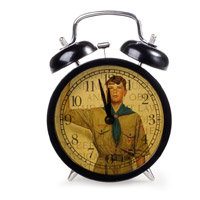 On my honor I will do my best To do my duty to God and my country and to obey the Scout Law;  To help other people at all times; To keep myself physically strong, mentally awake, and morally straight.

Americans are just 24 hours away from a decision that could change the landscape of one of the oldest institutions in the country. As the clock ticks down to Wednesday afternoon, when a final decision is expected on the Boy Scouts membership policy, the warning signs continue to grow.   Legal experts, local councils, and even other countries are frantically trying to talk the Board out of its local compromise for fear that it would end–not just a century’s worth of influence–but the organization itself.

In Canada, where leaders crumbled to the homosexual agenda, for inclusions sake,” the results were devastating.   Once the floodgates opened to females, atheists, agnostics, homosexuals, bisexuals, and transsexuals in 1999, the Scouting program took a national nosedive, losing more than half of its membership (300,000 to 130,000) in just five years!   There, Scouts march in gay pride parades while leaders struggle to deal with their own “secret files” of child sexual abuse.   Brian Rushfeldt, who heads up Canada Family Action, says the BSA only needs to look to its northern neighbor to see how the experiment of political correctness failed.   “The notion that we need to protect homosexuals more than we need to protect children… has been a disturbing trend,” he said–one that will kill the Boy Scouts of America.

If the Board embraces the local option, meaning that each council would decide its membership criteria, then the Scouts would no longer be protected under the umbrella of the Supreme Court’s 2000 decision.   The justices’ ruling in that case was based largely on the premise that the Scouts, as a national organization, have the right to establish codes of conduct and membership.

If the Board passes that responsibility on to local councils, or makes it optional, then the BSA would be well outside the scope of the Supreme Court’s ruling. It would open up regional troops to hundreds of lawsuits from homosexual activists, who would insist that Scouts have to comply with whatever local anti-discrimination laws are in place.

If it’s money the Boy Scouts are worried about, imagine the costs of fighting a nationwide assault on any troop that bans homosexuals! The legal bills would far outweigh whatever corporate dollars the new policy might yield.

Out west, a coalition of 33 Boy Scout Councils, representing 540,000 Boy Scouts, are  joining forces “to express  concern about the pace at which such actions are being taken… [W]e request that a final vote on this policy reversal be delayed to allow other stakeholder[s’] voices to be heard and a more thorough analysis of the impact on local councils.  The voices of existing chartered partners and financial contributors must be heard alongside those of our volunteer leaders and the parents who entrust their children to us.”

This is a decision which cannot be ‘undone.’ Like so many American parents, we’re  stunned at the timing of the proposal, which “flies in direct contradiction” of the results of the two-year review that upheld the ban on open homosexuality.

Randy Sharp of the American Family Association noted that throughout its entire history the BSA “has had character and integrity and has stood firm on moral values. If they reverse this policy, then what they’re saying is that to remain ‘morally straight’ isn’t as important as they’ve been saying for the past 100 years.  You’re signing a death warrant when you say you’re going to allow open homosexuals to participate in a program with young boys.”

Albert Mohler, president of Southern Baptist Theological Seminary in Louisville, said the policy change would be “nothing less than disastrous for the Boy Scouts of America,” adding that “this is going to raise a fundamental question for the Southern Baptist Convention at the national level and in the churches” with regard to the denomination’s continued involvement with the Scouting program.

The majority of Christians see that   allowing homosexual Boy Scout leaders is  an affront to the goal of Scouting which is to instill in youth the ability to make moral and ethical decisions over a lifetime by a careful application of the Scout Oath and Law.

If the Scouts cave to homosexuals, what next?  Will they remove God from their oath?  The Freedom from Religion Foundation recently said  that it was outrageous that the Boy Scouts  “which has proudly excluded both atheists and gays from its membership, announced yesterday”  that it is considering “lifting its ban on gays — but not atheists.”