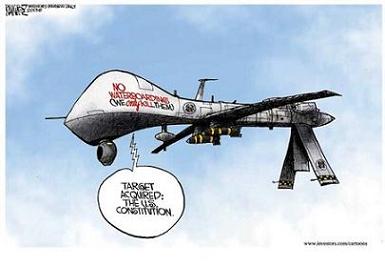 You know Obama has crossed over the line when The New York Times, that bastion of liberal propaganda, prints a “sensible” op-ed against his policies.

“It was disturbing to see the twisted logic of the administration’s lawyers laid out in black and white.   It had the air of a legal justification written after the fact for a policy decision that had already been made, and it brought back unwelcome memories of memos written for President George W. Bush to justify illegal wiretapping, indefinite detention, kidnapping, abuse and torture.”

The “Lawful Use of Lethal Operation Directed Against U.S. Citizens”  was written by the Justice Department and coyly describes another, classified document that actually provided the legal justification for ordering the killing of American citizens.

That document, which has still not been given to Congress,  was sent to Capitol Hill seven months after the military carried out President Obama’s orders to kill Anwar al-Awlaki, an American who moved to Yemen and became an advocate of jihad against the United States.   In private, administration officials say Mr. Awlaki was a commander of an Al Qaeda affiliate and actively involved in planning attacks on the United States.   Publicly, it has refused even to acknowledge that Mr. Obama ordered Mr. Awlaki killed.

The White House has vigorously fought holding any court hearing over the killing of Awlaki or his 16 year old son,  who was killed in a subsequent attack.  “The American Civil Liberties Union is suing to have the operational memo on those killings released, arguing that an American citizen has constitutional rights that a judge must make sure are being respected. We agree.”

According to the white paper, the Constitution and the Congressional authorization for the use of force after the attacks of Sept. 11, 2001, gave Mr. Obama the right to kill any American citizen that an “informed, high-level official” decides is a “senior operational leader of Al Qaeda or an associated force” and presents an “imminent threat of violent attack.”

It never tries to define who that  “informed, high-level official” might be, and the authors of the memo seem to have redefined the word “imminent” in a way that diverges sharply from its customary meaning.   It talks about “due process” and the need to balance a person’s life “against the United States’ interest in forestalling the threat of violence and death to other Americans.”

But it takes the position that the only “oversight” needed for such a decision resides within the executive branch, and there is no need to explain the judgment to Congress, the courts or the public — or, indeed, to even acknowledge that the killing took place.

The paper argues that judges and Congress don’t have the right to rule on or interfere with decisions made in the heat of combat.

The white paper “is a confusing blend of self-defense and law of war concepts and doesn’t clearly explain whether there is a different standard for killing a senior Al Qaeda leader depending on whether he is a citizen,” said Kate Martin, director of the Center for National Security Studies. “Its due process analysis is especially weak.”

This dispute goes to the fundamental nature of our democracy, to the relationship among the branches of government and to their responsibility to the public.

Who Would Have Thought!

There are no longer any  rules except  OBAMA RULES