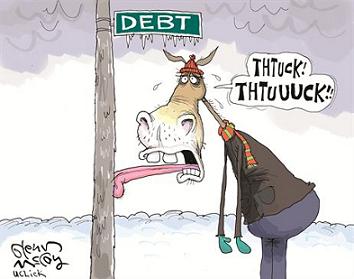 April 8, 2011,  Washington’s leaders announced that they’d just done something extraordinary. They had agreed to cut the federal budget — and cut it big.

“The largest annual spending cut in our history,” President Obama said in a televised speech.  To prevent a government shutdown, the parties had agreed to slash $37.8 billion: more than the budgets of the departments of Labor and Commerce, combined.

Republicans, patting themselves on the back,  pushed the bill as a a win for austerity.   There would be “deep, but responsible, reductions in virtually all areas of government.

Unfortunately,  truth always rears its head as the  so-called budget cuts fell far short of the promises.  True, there were some cuts   but the overall bill was nothing short of more Washington illusion.

The bill was stuffed with gimmicks that made the cuts seem far larger and politicians far bolder than they actually were.

The Department of Transportation  got credit for “cutting” a $280 million tunnel that had been canceled six months before the bill was signed.   They  also “cut” a $375,000 road project that had been created by a legislative typo, on a road that did not exist.

At the Census Bureau, officials got credit for a whopping $6 billion cut, simply for obeying the calendar –  They promised not to hold the expensive 2010 census again in 2011.

Congress   “cut” $14.6 million from its own budget to build the Capital Visitor Center  that had already been built.

The Pentagon’s “cut” of $6.2 billion for military construction?   Through a combination of congressionally installed gimmicks and military ingenuity, the Pentagon escaped nearly unscathed.   The Pentagon “cut” $5 billion by doing nothing at all.  This was money that had been needed the year before to help close out the Base Relocation and Closure process which they had already said wouldn’t be needed for 2011.

The Washington Post  reports that an examination of 12 of the largest  2011 budget cuts shows that, thanks in part to  gimmicks, federal agencies absorbed $23 billion in reductions without losing a single employee.

“Many of the cuts we put in were smoke and mirrors,” said Rep. Mick Mulvaney (R-S.C.), a hard-line conservative now in his second term. “That’s the lesson from April 2011:    when Washington says it cuts spending, it doesn’t mean the same thing that normal people mean.”

Disillusionment with that bill has persuaded many conservatives to reject a line-by-line, program-by-program approach to cutting the budget.   Instead, many have embraced the sequester, a looming $85 billion across-the-board cut set to take effect March 1.   Obama and GOP leaders have said they don’t like the idea: the sequester is a “dumb cut,” in Washington parlance, which would cut the government’s best ideas along with its worst without regard to merit.

But at least, conservatives say, you can trust that this one is for real.  The sequester is real cuts.

Now Washington is facing the  sequester which would cut $85 billion starting March 1.   By all historic accounts, the actual idea for the sequester—the massive front-loaded cuts to the federal budget designed to rip a hole in spending programs near and dear to both Republicans and Democrats—originated with the  Obama administration.

But now that it is about to become reality, Obama is out  to persuade Republicans to cancel it or replace it with a package of spending cuts and tax increases.  “If Republicans in Congress want spending cuts, there is a simple way to get  them that will not imperil our economy, our national security, or vital programs  that middle class families depend on: come to the table for a balanced plan that  also closes loopholes for millionaires and billionaires,” Pfeiffer argued  Sunday. “The unbalanced Republican approach does not reflect our values as a  nation, and would not help our economy continue the important progress we are  making. It’s time for Congress to act.”

The Sequester May Not Be “Fair,” but It’s Real and It Would Slow the Growth of Government.   Even with  the sequester, the burden of government spending will still be about $2 trillion higher in the next 10 years.

The other common argument against the sequester is that it represents an unthinking “meat-ax” approach to the federal budget.   But a former congressional staffer and White House appointee says this is much better than doing nothing.

Professor Jeff Bergner wrote for today’s Wall Street Journal –  “You know the cliché: America’s fiscal condition might be grim, but lawmakers should avoid the “meat ax” of across-the-board spending cuts and instead use the “scalpel” of targeted reductions. …Targeted reductions would be welcome, but the current federal budget didn’t drop from the sky.  Every program in the budget . . .is in place for a reason:  It has advocates in Congress and a constituency in the country.  These advocates won’t sit idly by while their programs are targeted, whether by a scalpel or any other instrument. That is why targeted spending cuts have historically been both rare and small.

The most likely way to achieve significant reductions in spending is by across-the-board cuts.  Each reduction of 1% in the $3.6 trillion federal budget would yield roughly $36 billion the first year and would reduce the budget baseline in future years.  Even with modest reductions, this is real money. …let’s give up the politically pointless effort to pick and choose among programs, accept the political reality of current allocations, and reduce everything proportionately. . . Are we really to believe that a government that spent $2.7 trillion five years ago couldn’t survive a 3% cut that would bring spending to “only” $3.5 trillion today?  Every household, company and nonprofit organization across America can do this, as can state and local governments. So could Washington.

Across-the-board federal cuts would have to include all programs—no last-minute reprieves for alternative-energy programs, filmmakers or any other cause. All parties would know that they are being treated equally.   Defense programs, food-stamp recipients, retired federal employees, the judiciary, Social-Security recipients, veterans and members of Congress—each would join to make a minor sacrifice.   It would be a narrative of civic virtue.”

Obama and his “progressive” ilk, along with  many of the establishment GOP elite think that any real reduction is asking too much and instead want ever-higher taxes to support an ever-growing government.     What they can’t or refuse to accept is that if they do nothing to seriously  reduce spending and cut our deficits NOW, there may not be a TOMORROW!