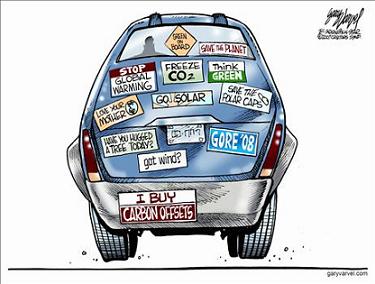 It should come as no surprise that for  Al Gore, the Godfather of Hypocrisy, the perfect future he envisions, at least for the rest of us,  is one in which democracy and capitalism as we know them have ceased to exist, conservatives have stopped promoting their smaller government agenda, and there is more regulation.

“Capitalism, like democracy, must also be reformed,” the former vice president argued in his latest book “The Future,” which was released Jan. 30.

Along with bashing capitalism, democracy and conservatives, “The Future” pushes  Gore’s agenda of increased government regulation to prevent  what he claims is an impending   weather disaster.    He also praised radical Occupy Wall Street as well as Al Jazeera, the new owners of his Current TV network.

Democratic capitalism,  according to Gore, in its current form is “producing unfair and intolerable results,”  and is “suffocating control of policy decisions by elites, the ever  increasing inequalities of income and the growing  concentrations of wealth, and the paralysis of any efforts at reform.”

Somehow I seriously doubt  that Gore is willing to part with that $300 million he’s managed to amass since leaving the White House, most of which was made through our “unfair and intolerable” capitalism system.

Big Al sees the Occupy Movement  as having been “driven by the dawning awareness of the  majority of Americans” of the flaws in “democratic capitalism in its  current form.   According to Gore, the Occupiers fought a losing battle against “the forces of  wealth and corporate power,” which he claims are weakening the “state of democratic decision making in the U.S.” and have “paralyzed the ability of the country to make rational decisions in favor of policies that  would remedy these problems.”

Gee, all this time I thought the Occupy Movement  failed because they were a bunch of rebels without a clue.

According to news reports, Gore made about $100 million from the roughly $500 million deal selling his cable channel to Al Jazeera, and has been defending that decision ever since.   In his book, Gore refers to  Al Jazeera,  that  terror-friendly network,  as  “feisty and relatively independent,” and  praised their involvement in helping to mobilize the Arab Spring.      The rest of the sane world see Al  Jazeera as a  purveyor of propaganda, consistently offering the anti-American, anti-Israel, pro-Islamist line at a time when America  has been threatened by Islamic terrorists and has gone to war against  them.

Gore had previously refused to sell Current TV to conservative radio and TV  personality Glenn Beck, citing that “The legacy of who the network goes  to is important to us and we are sensitive to networks not aligned with  our point of view” (Non-Socialist).    However, he has no  problem with the point of  view of those who throw birthday parties for terrorists.

The Godfather of Hypocrisy is also  baffled as to why anyone would be opposed to further  government regulation.  And showing his true liberal bent, he repeated the liberal line about the Tea Party movement being “fake grassroots”, labeling it “faux-populist,” and nothing  more than a front of corporate lobbyists.

“Within the United States, it is a measure of how distorted the ‘conversation  of democracy’ has become that in the aftermath of the economic  catastrophe, the most significant ‘populist’ reaction in the U.S.  political system was not a progressive demand for protective regulations to prevent a recurrence of what had just happened, but instead a  right-wing faux-populist demand by the Tea Party for less government regulation.”

Conservatives didn’t escape his scorn as  he imaginatively spoke of a unified  political Right with “lockstep discipline.”    This group of “corporate  Musketeers”  strive to “starve the government of its  resources,” (higher taxes)  so that “it is capable of interfering as little as possible  with the plans of corporations and the interests of the elites.”     Said  the guy who just sold his TV network to terrorist sympathizers for $500  million.

And of course no Gore book would be complete without a warning about the  calamitous threat of weather.   His push for expanded regulation to protect the environment takes up the bulk of the book.    One of the  sources he cited to back up his claims was NASA scientist, climate  change doomsday prophet and favorite of the left  discredited scientist, James Hansen who Gore calls a  “global warming expert.”

But maybe it’s fitting that Gore would use a discredited scientist to back  up his warnings.   After all, the very day his 2006 movie “An Inconvenient Truth” opened in theaters, Gore told NBC’s Katie Couric that sea levels would  rise 20 feet or more worldwide by 2010, the polar ice caps would melt  and the U.S., Europe, Asia and Africa would become deserts if nothing  was done.   But, 2010 came and went, and the polar ice caps still exist.

Gore should see if he can get a refund for those apocalypse prediction classes that he took from the Mayans.