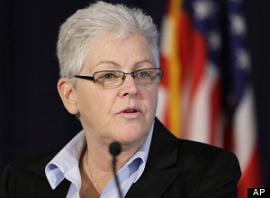 President Barack Obama told reporters that he  is choosing EPA Assistant Administrator Gina McCarthy, the architect of unprecedented restrictions on energy use and power generation, to become the new head of the U.S. Environmental Protection Agency.

McCarthy is a longtime advocate of energy restrictions that she says are necessary to stop global warming.   She also says government should actively seek to transform energy production in the United States away from affordable conventional sources and toward more expensive renewable alternatives.

“We must transform the power sector in a way that meets the needs of the 21st century,” McCarthy argued at the 2011 Energy, Utility & Environment Conference (EUEC) in Phoenix, Arizona. She repeatedly used the word “transform” to describe EPA’s goals for the nation’s energy use.

McCarthy acknowledged that EPA global warming restrictions are raising the cost of electricity in the United States, but asserted, “We already have relatively low and declining electricity costs.” U.S. Energy Information Administration (EIA) data, however, proved McCarthy wrong, showing the average retail price of electricity rose 50 percent since 1999 and did not decline on a year-to-year basis since 2001-2002.   I don’t personally need the EIA to tell me my electric rates have risen since Obama took office – all I have to do is open the bill.

During a subsequent press conference, a reporter noted that EPA’s figures are based on its assertion that it creates $9.1 million in economic benefits for every life it claims to extend through regulations.   McCarthy was then asked how EPA arrives at its $9.1 million figure and why it is so much higher than the value other federal agencies assign to lives saved or extended.  While she could not give the reporter a specific answer she did assure (?) us that the EPA “works in close consultation with the White House” to arrive at her fictional assertion.

McCarthy has been working for federal and state governments for more than 25 years. Her career has spanned  five  Massachusetts governors, including former Republican presidential candidate Mitt Romney, and  one Connecticut governor, Jodi Rell, under whom she ran the state’s Environmental Protection Department. She was confirmed to EPA and came to Washington in 2009.

Obama, who vowed to make tackling the threat of climate change a second-term priority, is most assuredly going to rely on McCarthy to push the global warming scam.  McCarthy will have to answer for her agency, which isn’t the most popular among congressional Republicans, who have criticized the EPA regulations it has rolled out in recent years as job-killers.   I am sure the coal industry will raise some opposition to her nomination and some Republicans are likely to hem and haw, but I am just as sure that just like Brenner and other far left appointees, they will talk a good fight and then confirm her.

← A New Socialist Pope?
My filibuster was just the beginning →