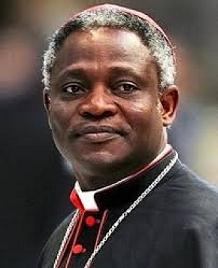 An investigative report by Cliff Kincaid, director of AIM Center reports that African Catholic Cardinal Peter Turkson is in the running as the next pope.  Turkson carries the fancy title of the president of the Pontifical Council for Justice and Peace, an arm of the Vatican.

The media has failed to note  the existence of a left-wing lobby in the U.S. working feverishly on Turkson’s behalf.    It is the same group of radicals, with connections to billionaire hedge-fund operator George Soros, who backed Obama for president by claiming he shared their Catholic values.

One of Turkson’s chief supporters in the U.S. appears to be Stephen Schneck,  an associate professor of politics at the Catholic University of America (CUA) and a top official of “Catholics for Obama.”   Schneck runs CUA’s Institute for Policy Research & Catholic Studies and holds conferences featuring left-wing and liberal speakers.

Former AFL-CIO boss John Sweeney, a member of Democratic Socialists of America,  said at one of  Schneck’s conferences that Jesus Christ was pro-union. Another speaker  was socialist Harold Meyerson.

When Turkson’s Vatican’s Pontifical Council for Justice and Peace issued a controversial 2011 document, “Towards Reforming the International Financial and Monetary Systems in the Context of Global Political Authority,” Schneck called it “breathtaking” and a “Catholic way forward” from the present crisis.

A “global political authority” (one world government)  was also endorsed  by Pope Benedict XVI’s “Charity in Truth” encyclical in 2009.

Schneck, who served on the board of Catholics in Alliance for the Common Good, a far left group funded by Soros, is so important a figure in progressive Catholic circles that there is speculation  that Obama will appoint him as U.S. Ambassador to the Vatican.   Michael Winters noted  that Schneck “has worked hand-in-glove with different offices at the USCCB [United States Conference of Catholic Bishops], with Catholic Relief Services, with the Catholic Association of Latino Leaders and the Catholic Coalition for Climate Change, and with other Catholic groups, organizing conferences that call attention to important issues.”

He wrote that “Schneck’s range of political and media contacts, his organizational capabilities, his ability to distinguish a central from a peripheral issue, all are vital to making these conferences a success.  It was Schneck that brought Cardinal Peter Turkson to CUA two years ago for a conference on Rerum Novarum.   Rerum Novarum, by the way,  is the basis for many “social justice” theories promoted by leftist and Marxist operatives within the Catholic church.

Rerum Novarum is a papal encyclical in which, as William Mayer notes, “the Church proclaimed itself competent to speak on economic matters, establishing a justification for governmental control, to a greater or lesser degree, of the marketplace and by extension, players within the economy, including everyday citizens and businesses.”

Turkson, who is from Ghana, has taken “social justice” to the global level, arguing for a “global financial authority” to solve the world’s economic problems.  For this reason, left-wing “progressives” backing Obama hope Turkson will be the next pope and use the Vatican in a global campaign against capitalism.

The Turkson document, “Towards Reforming the International Financial and Monetary Systems in the Context of Global Political Authority,” had “proposed the creation of a global political authority to manage the economy and a new world economic order” with the United Nations “as a point of reference.”  Crisis Magazine, a conservative Catholic publication,  said  it contained “some downright frightening prescriptions for reshaping the worldwide economy” and could be seen as “a blueprint for a George Soros agenda.”

Turkson spoke at the May 2, 2011,  conference  organized by Schneck at CUA on the subject of Rerum Novarum.  He appeared with Bishop Stephen E. Blaire, chairman of the Committee on Domestic Justice and Human Development at the United States Conference of Catholic Bishops, and Alexia K. Kelley, deputy director of the Obama White House Office of Faith-Based and Neighborhood Partnerships.

Are we witnessing the last pope?